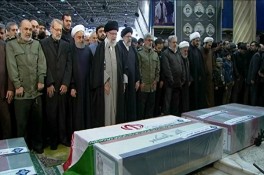 Leader of the Islamic Revolution Ayatollah Seyed Ali Khamenei on Monday morning performed the ritual ‘prayer for the deceased’ (Salat al-Mayyit) in the funeral of top Iranian General Qassem Soleimani, who was martyred in a US airstrike last week.

The Supreme Leader of The Islamic Revolution Ayatollah Sayyed Ali Khamenei mentioned a memory from martyr " Mojammad Jahan Ara " through the memorial congress of the martyrs of Khorramshahr in the Friday prayer on 2003.

Imad Mughniyah who was known as Haj Rezvan was one of the top commanders of Hizbollah. He participated in many anti Zionist operations and played a key role in the region.
12345Next Page