In the year 1333 AD the city mentioned was born in a religious family and faithful. In childhood, his mother - who was the believing woman - lost. 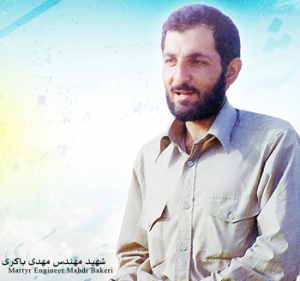 Birth and childhood
In the year 1333 AD the city mentioned was born in a religious family and faithful. In childhood, his mother - who was the believing woman - lost. In Urmia finished elementary and high school and high school (along with the testimony of his brother, Ali Bakeri the executioners SAVAK) was into the political process.

Political activities - religious
After graduating from very affected despite the death of his brother and was sadden, to found the university and was studying mechanical engineering. Since the introduction of the University of Tabriz, one of the fighters of the college. He along with his brother Hamid to bring to the city.

Shahid Bakeri during his political activities (according to confidential documents obtained) of the Organization for Security East Azerbaijan (Savak) was monitored. After a while, Hamid to communicate with other fighters, sent to foreign countries to send arms to militants inside the country.

M. Shahid Bakeri soldiers in the period following the declaration of Imam Khomeini (RA) - While the duty officer was in Tehran - the barracks escape and secretly lived and carried out various activities for the Islamic Revolution.

Shahid Mahdi Bakeri marriage coincided with the start of the war. Colt gun was his wife's dowry. Two days after the contract went to the front and then two months into the city and the interests of the region, with responsibility for Jihad province's valuable services to the people.

Shahid Bakeri over responsibility as commander of Army operations Urmia extensive efforts to establish security and removal of the filth there Vabstgah and mercenaries East and West did and despite various responsibilities around the clock activities, after the start of the war, their task of jihad with the infidel Baathist and Islamic homeland invaders to be fronts vision and path.

Shahid Bakeri with his abundant talent and dedication as deputy brigade to Najaf Operation Fath ol-Mobin could be effective in achieving victories. The operation was one of the battalions under siege, that they, along with the number of troops, with their unique courage and foresight brought the siege. At the same operations in the region Rqabyh the eye was injured and in less than a month in operation Jerusalem (the same as) where he saw the triumph of Islam over the forces of the Baathist aggressors.

In the second stage operation of the waist Jerusalem was wounded and despite the injuries which had in the third stage of operation, the brothers went to the headquarters of the wireless mobilization guide. Operation Ramadan on the unrelenting battle with the Ashura Brigade commander in Iraq, this time also was wounded, but each injury, he was more determined than ever it was in front of and without fatigue for equipment, organizing, directing forces and practical design, was trying day.

Muslim ibn Aqeel and his command of the army in the operation of Ashura and sacrifice Warriors Warrior, a large part of the Islamic Iran ruddy soil and was released a few strategic area.

Valfjrmqdmaty operations and Fajr Shahid Bakeri in one, two, three and four as commander of the army of Ashura, Basij, along with the brave and devoted, on task and fight the aggressors, fitness and self-sacrifice demonstrated immersive.

Khyber operation when his brother Hamid, a high degree Shhat achieved, despite the affection that he had, without the express sorrow with his family was contacted and stated: H. testimony of divine grace, which encompasses our family. And wrote in a letter to his family:

I wish to advise Hamidi, who is opening the way to Karbala in front'm still willing and Shahid continue until Islam prevails.

Critical situation in the battlefield and the war effort, attending the funeral of his brother and Hmrzmsh clear that for many years was arrested along. At the risk of fraternity days before the revolution, and political battles at the front, alongside Mehdi, his devotion.

Shahid Bakeri role and the army of heroic epic of Ashura in Khyber and seizure of Majnoon Island and resistance in defense of their Patk·hay showed extreme enemy is obvious. In the preparation stage of preparations for Operation Badr, although the days passed slowly, but Mehdi seriously, all the forces for battle, to stimulate and encourage men and mystical, and as a Perfect Master and mystic, what the fighters and lovers of God and the testimony should know apply the battle, shared with troops.

After the martyrdom of his brother Hamid and some of his companions, was not a soul in the body Naaramsh and it was clear that the gathering would join them soon. Fifteen days before Operation Badr overlooking the holy city of Mashhad and supplications of Qalybn Mvsyalrza (AS) was asked by God to be his lot Shhdt success. Then Imam Khomeini and Ayatollah Khamenei and by crying and begging insistence and request that they pray for his testimony.

The brave commander in Operation Badr on 11/25/63, due to the critical situation of the operation, as usual, was the most dangerous scenes campaign, while the Warriors division in the East Tigris near the lead, and was trying to capture positions to establish the Patk·hay enemy, who waged a valiant struggle, due to direct shot Iraqi agents, the call will die, he was granted a meeting with her lover. When the body was moved Hvralzym Mthrsh through the water, a boat carrying the body of his enemy was targeting rocket-propelled grenades and drops of pure being attached to the sea.

His deep, passionate followers of Imam (AS) and fiery love Ababdallhalhsyn (AS) and Kvlhbary of piety and a lifetime of struggle in the Sbylallh, was ahead of his comrades and came to the land of love and God's blessings in Eden Rescue infinite and beyond achieved recognized. Shahid Bakeri felt ashamed in front of your divine blessings and grace Mym only to God Almighty had hoped. In his will has pointed out that what I Thydstm, God Qbvlm it.

Shahid neighborhoods between all the traits of martyrdom refers to introducing him and his martyrdom ceremony, mystery and romance need God tells him to and from Shahid says:

How lovely are thy God, and worship, lo do not know. And in my veins flowed the blood should be saying to all cell in the GMT GMT.

The mystical expression reflects the spirit of honorable martyrs is long and full of purity that only through self and spiritual excursion was achieved.

the memories
Memory 1
The Imam, Mahdi and I say: "Mr. Mahdi! Pleasant dreams to you ... like you have seen ... yes ..." smiled and asked in surprise: "What are you?" I said all that before your stories. Shahid was one of the battalion commanders a month ago, had dreamed of making beautiful Paradise. Asked: "Who prepared the house for you?" They said, "is scheduled to join private collectors paradise." Baz was asked: "Who is he?" I then silence. M. eagerly nodded and said: "Well ... continue." I said, "replied the Mehdi Bakeri to come. In short, sir angels threw very hard." Colors looked down and his face turned red and said calmly: "My God, the things that we do not allow militia to go to heaven! Forth in heaven do not stand in our way." Then sank and I was away. I was sure that M. spends the last days of separation from your partner.
Memory 2
One day, coming home from school, while cheeks and red hands and Kbvdsh, chilling tale of depth that has become in his life. Amenities her father decides that provide the same night. Two days later, with a new and beautiful Amenities goes to the schools. Sunset who returns from school with discomfort, coat corner of the room to cast. All family members surprised her with a look, and M. tears flowing from the eyes, said: "How satisfied you will wear my coat while I Bghldsty like the cold vibrates in me."

Will Badr commander Shahid Mahdi Bakeri
my dears! If the day we give thanks to God who has given us the blessing of Islam and Imam still low. Recognize that truth and purity of intention in practice, only Charhsaz us. ... Know Islam is our only way to salvation and happiness.

... Always remember your God and follow God's commands. Supporter and follower of Imam your heart. Importance of prayer and remembrance ceremonies Imam (AS) and martyrs Give Way to Happiness and luggage hereafter. And Zeinab Husseini always find training mission and its mission to know them. And their children as soldiers train with faith and love of martyrdom and Lmdarany competent and heir of Hazrat Abolfazl (AS) for Islam once again.

When Martyr Bakeri Thought Martyr Hemmat was a SAVAK Agent