Martyr Abbas Babaei was a great man who was raised in the school of martyrdom. He was a fighter whose piety and devotion was a roaring sea and whose moments of life were full of ups and downs and tumultuous waves. 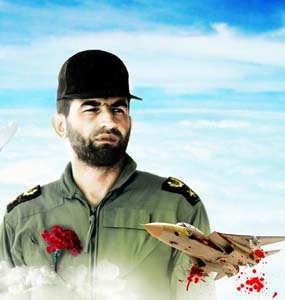 Martyr Abbas Babaei was a great man who was raised in the school of martyrdom. He was a fighter whose piety and devotion was a roaring sea and whose moments of life were full of ups and downs and tumultuous waves. He was a virtuous man whose soul was filled with love, selflessness and generosity; a soldier who was a brave veteran of battlefields, and a great fighter against his own carnal desires.
From the time he got to know himself, he struggled a lot to take steps only for the sake of Almighty God’s satisfaction. Indeed, he was an unknown person who was known to everyone; a simple-hearted rural man who became a very brave and intrepid pilot.

Martyr Babaei was born in 1950 in Qazvin city. He accomplished his elementary and high school in Qazvin and entered the Air Force Pilot School in 1969. When he passed the basic courses, he left for the United States of America in order to complete pilotage courses there.
According to the rules of the college, Babaei had to live with an American roommate for two months. At first face, the Americans would justify this work as a way of enhancing the students’ English language, but the reality was something else. Abbas would do all his religious practices and rituals in any conditions and he hated the licentiousness and immorality existing within some American students. Describing Abbas’ morality and behavior in a report, his roommate stressed "Babaei is a reserved and isolated person, and indifferent to customs and social norms. His behavior actually indicates his negative stance against Western culture; he is strongly committed to the traditional culture of Iran. He also pointed out that Babaei would go to a corner and talk to himself (Babaei actually would perform his daily prayers in that corner).

Interview with a Medic from Sardasht on the Anniversary of Sardasht Chemical Bombing: Sleeping Children in Silent Alleys

A Short Biography of Martyr Hussein Kharrazi: Martyr Kharrazi in the Words of Martyr Avini (Part 9)