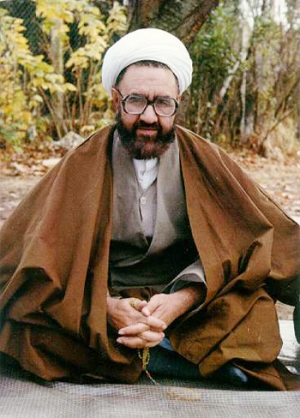 BEFORE REVOLUTION: He was member of the Association of philosophy and professor of Tehran University
AFTER REVOLUTION: revolutionary council president

Martyr MOTAHARI was born on February 3, 1920 in FARIMAN near to MASHHAD city, in a religious family. When his mother was pregnant, saw a sweet dream. In that dream, angels told her that her son will give valuable services to Islam.
MORTEZA was the fourth child and father was a trusted clergyman of KHORASAN. He learnt to be familiar with Quran from his father.
The only enjoyment in their village was horse riding. And MORTEZA was one of the best riders. In childhood, father sent him to local religious school in their own village.

When he was 13, decided to go to religious school, this action was coincided when REZA SHAH attempted to make religious people and clergymen weak. Pray and Islamic teachings were forbidden in schools. People were not having right to mourn for MARTYR IMAM HOSSEIN in their homes also. At that time the situation became so difficult for clergymen, even MORTEZA`s father was coming out of the house at night only.
MOTAHARI studied about 2 years in ELMIYEH School but by the order of REZA SHAH, all religious schools were banned in MASHHAD city. So he desperately returned to village. But again decided to continue. But this time in QOM city.
QOM was a world of hope for MORTEZA. In the first years, strongly desired to be alone and overwhelmed at the thoughts and questions. In HOZEH School, there was a SEYED who was handsome with ethics and well behavior. All students including MORTEZA were praising him. His name was RUHOLLAAH KHOMEINI.
So MOTAHARI attended the ethic classes of IMAM, enthusiastically and was strongly influenced by IMAM.
Gradually, with the arrival of AYATOLLAH BOROUJERDI to QOM city, his sessions and HAJ RUHOLLAH`s became most important area meetings. Martyr MOTAHARI who had a keen interest in philosophy, was attending classes regularly. But for some reasons, HAJ RUHOLLAH could not continue his teachings. After that, MORTEZA met another great personality by name ALLAME TABATABAI. And began studying philosophy under his guidance.
This new master also had great influence on his thoughts.
MOTAHARI reached to the point that he started to teach younger students.
Martyr MOTAHARI married ALIYEH ROHANI, whose father was one of the MASHHAD clergyman in 1953. The result was four daughters and three sons. Ali and Mohammad are two of his sons.
ABAS HADIZADE textile engineer, AHMAD YAZDI pharmacist, ALI LARIJANI parliament president and MAJID ABASPOUR, SHARIF university professor are his grooms.

In those days, master was busy in teaching and discussion but was aware of political issues also and interacted with FADAIYAN ISLAM group. Because of some reasons, he was forced to migrate from QOM city and settle strangely in big city of TEHRAN. He was attending the philosophy classes of ALAME once in a week. Result of these meetings was a book by name PHILOSOPHY AND REALISM that surprised everyone and made him famous. Then worked as temporary lecturer in Tehran University. MOTAHARI was advisor for martyrs BEHESHTI and BAHONAR in doctorate. His second book by name RASTAN, really puzzled his fans and they expected something else. But the said book became popular among people and published many times. Even UNESCO announced it as the book of year.

In 1962, after the death of two prominent clergymen named KASHANI and BOROUJERDI, king thought there is no opposition force now. So he launched the white revolution. This action was opposed by clerics of QUM city and at the head of them was IMAM KHOMEINI.
King ignored the opposition. But that was the beginning of the revolution that ended the imperial regime in Iran. King crimes continued. Until MOHARAM month of the same year, IMAM in collaboration with MOTAHARI made a program for speeches against the government. Next day police rushed to their houses and arrested IMAM and MOTAHARI. But by the force of scholars, they were released after 43 days. In 1965 a group called ISLAMIC MOTALEFE GROUP was formed secretly. And MOTAHARI, by the order of IMAM, was responsible for overseeing the work of the said group. In the same year, HASAN ALI MANSOUR by support of America became prime minister. And in first action, passed the capitulation bill in which nearly 40 thousand American advisors got immunity. When this news reached to IMAM, he was extremely upset. And in a fiery speech called this act as an insult to great people of Iran. Immediately, as interfering the national security, king sent IMAM to exile in Turkey. Hard throbbing atmosphere engulfed the country. In the meantime to break this situation, the MOTALEFE group found no way except to kill the main men of the government. For the first step the prime minister was deserved to death. His death sentence was issued by AYATOLLAH MILLANI. Then group members had shot him dead in front of national assembly. By hearing this, people, rushed to the streets and distributed sweets. After identifying and arresting the members of MOTALEFE group, a judge removed all documents related to MOTAHARI. And by this way, master`s life was saved. So this great man continued his Islamic activities.

Professor MOTAHARI established Islamic guidance institute in SHEMIRAN Street of Tehran in 1968. This institute is considered to be the cultural heart of the capital, aimed at promoting and disseminating Islamic ideology and it soon became known among the people. But very soon, its manager interrupted the master`s works. So professor resigned. After that, doctor SHARIATI and many others eliminated their programs. So master tried to do his activities in other centers like ARG mosque. But all Islamic centers were shut down one after another by the order of king. In 1976, SAVAK did not allow the master to speech in mosques. In later years, he was forced to resign from the university. But he continued his teachings in his own house. Shortly after the news of MOSTAFA KHOMEINI`s martyrdom, demonstrations were held throughout Iran which was coordinated by the name of IMAM, causing the people, come to streets and shout, death or KHOMEINI. After that king forced president of IRAQ, SADAM HOSEIN to force IMAM for stopping the struggle or leave IRAQ. IMAM had chosen the second option and decided to go to Kuwait. But Kuwait was afraid of king. So they did not issue the visa. Suddenly IMAM decided to go to France. MOTAHARI was advisor on all matters. After some days, leader decided to come to Iran. Master was worried about hijacking or explosion in the plane. But by the grace of God nothing happened and plane landed in the airport. And in most welcoming ceremony, people saw their true leader. 10 days later revolution succeeded.

After revolution success, enemy decided to revenge.
And master was the first victim. In a dark night, when AYATOLLAH MORTEZA MOTAHARI came out of his house, a member of FORGHAN group fired on his forehead. Blood was flowing his forehead and then the noble man of Islam fell down.

Master was believing that we should show true Islam. We should not add or reduce from it. Martyr is believed in INNATISM.

Master`s opinion is against of Freud. He says, Islamic philosophy gives a certain originality. According to him, majority of Islamic philosophers were SHIA and from the beginning the SHIITE sense was philosophical wisdom.

Professor believed that perception is not material and the brain is tool of perception and action is carried out by an immaterial soul.

According to him, the decline of Muslims is because of their misunderstanding in religion. MOTAHARI believes some people like IQBAL LAHOURI, due to lack of deep understanding in Islamic culture, had some mistakes in discussions about proof of God and religious experience.

Shiite clerics, in the first was independent from government agencies. People believe that the ruling authority should be approved by the religious leader.

Therefore, IMAM in his command writes:

According to religious right and confidence of majority of people, I appoint the head of government.
Basically, people choose their own religious leader. This is real democracy.

Martyr MOTAHARI identifies advantages and disadvantages for clergy system. He says: limitless freedom in using clergy dress is a great disadvantage. It is seen that some people who have neither faith nor science, in order to take the advantage, wear this dress and cause scandal.

In late 1982, Tehran municipality made a small memorial site near the assassination place of MARTYR MORTEZA MOTAHARI in SHEMIRAN.

SOME OF HIS BOOKS: