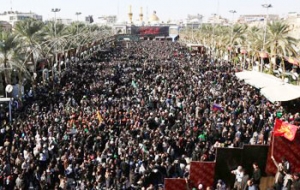 Millions of pilgrims have gathered in Iraq's holy city of Karbala to mark Arbaeen, a sacred Shia Muslim ritual. Arbaeen, also known as Chehlum, commemorates the end of the 40-day mourning period after the killing of Imam Hussein, the Prophet Muhammad's grandson, in a battle in 680 AD. His martyrdom is considered a defining event in the schism between Sunni and Shia Muslims.