The memorial ceremony of martyr "Haj Saeid Adibi" will be held in Dizain village in Taleqan
Navideshahed - A memorial ceremony will be held for the martyrdom of the brave commander martyr "Haj Saeid Adibi" during these holy days (the holy days of Muharram) with the presence of martyr's families , the military authorities and the governmental officials and the public people in Taleqan. 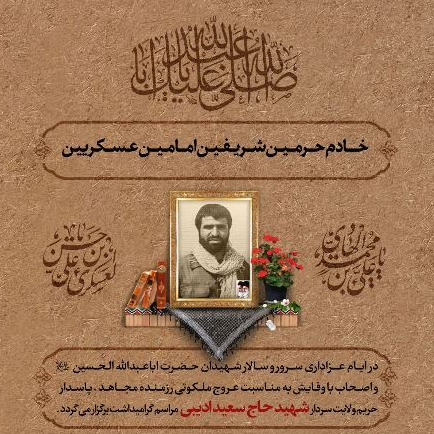 The following ceremony will be held at the Seikh Morteza Dizaini mosque in the Dizaini village. It is necessary to mention that Haj Saeid Adibi was the deputy manager of the 10th Sayyed al Shohada battalion during the sacred defense.
Finally he was martyred at the Baqiyatallah (AJ) hospital since his chemical injuries. He had suffered it for many years but never get tired of it and finally joined his martyrs friends.
Haj Said Adibi chemicaly injured at the Khaibar operation by the Baathi forces, he was an active man at the cultural activities. He never wanted to be known.... his pure body was burried at the Behesht e Zahra (SA).
Message End/
Tags:
navideshahed ، issar and martyrdom ، sacred defense ، iran iraq war ، chemical victim ، chemical bombardments ، Haj saeid adibi
Subscribe to newsletter