Martyrs spoke about Proctors of the revolution in their wills

years later, when you read this will, be aware that my schools is school of martyrdom and my religion is the religion of blood and from the day that I attended to Sepah Pasdaran I realized the meaning of being in Hussein’s (a.s) army. 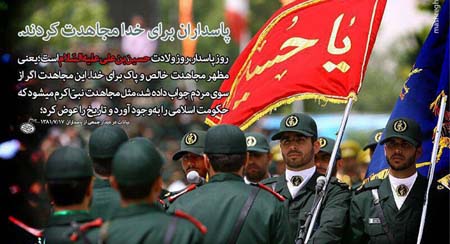 Martyr Abdul Hamid Husseini in a letter wrote to his brother: years later, when you read this will, be aware that my schools is school of martyrdom and my religion is the religion of blood and from the day that I attended to Sepah Pasdaran I realized the meaning of being in Hussein’s (a.s) army.

NAVID SHAHED: martyr Ahmad Taqi Pour Monfared with a beautiful and sweet language wrote: in the way I really missed Imam Hussein (PUH) and his Holy Shrine. I didn’t know how I must control myself and my tears were coming uncontrolledly. O’ God! Take me to Hussein (a.s), O’ God! Don’t take me back to home because I might die of embarrassment. Embarrassment from martyrs’ family and our brothers in Sepah. This clothe apparently is green but actually we wear it for reed color of blood and with passion of becoming martyrdom.

Martyr Ahmad Younesi also about his final destination is written: I didn’t chose Sepah as a job, but Sepah is a tool or it is better to say is a bridge that take me to my Lord, and God willingly this might happen although I am a unworthy person but hopefully God be gracious to this smite servant and accept me like other lover that reach to their divine beloved.

Martyr Seyed Musa Husseini in a massage warned to Sepah: my Sepah’s friends and brothers! Do not leave Imam Khomeini lonely, O those who saying if we were in Imam Hussein’s era we would become killed in his path, this is Hussein of our time (Imam Khomeini) and here is Karbala (Iran). So be aware. Do not let lusts and temptations engage you in this world, always attempt for Qur’an and the first praying time and continue this till your death, which, God forbidden, this Revolution doesn’t hurt and continuously value it and protect it that regretting would be useless.

Martyr Hasan Heshmat Qahdarijani wrote: but to you protectors (Pasdaran)! Remember the blood of those many martyrs, Beheshti, Rajaee, Bahonar and other hundred martyrs. Nipped in the bud hypocrisy and division and prevent conspiracy. Before attending to Sepah become a protector.

Martyr Ali Reza Yousefi had a request from his fellows: if you receive my body take me with a car that scored by flowers to Behesht Zahra (a.s) and carve the logo of Sepah on my grave. Because I like that logo and respect to it. Because I understand its meaning. Do not wrote on my grave "miscarry” because I reach to my aim and that is martyrdom. I apologize from all my relatives and friends and pray for me. Pray for the Leader and request from God to give patient to martyrs’ family.

Martyr Asqar Abdolahi also defended hardly from Sepah and Protectors: God knows that Sepah people are include the most poor and oppressed people of Islamic society. They include in Allah’s path and they are not member of any group or party except the Hezbollah (the Allah’s party). Their purpose is nothing except protecting from Islamic Revolution’s achievements and expanding Revolution’s purposes in the world. They obey and follow Vellayat Faqih and sincerely wear the holy clothe of Pasdar (protector) and scarify their days and nights to Islamic Revolution.

Martyr Abdullah Karami also was sent a massage: My Dear Brothers! Good for you that are Imam Zaman’s (PUH) soldiers and his vice – right deputy. God forbidden, for fear that not misused from this holy clothe for your own benefits that would record in our Moulas’s mind. Brothers! Do not allow nobody get out of Imam’s path and do not allow the Sepah way which, is the way of God and its aim is serving to people become forgotten, and I swear to God it would be a great danger for Islam. Brothers! I impotently requested suppress those who enter to Sepah with their evil aims to prevent Sepah from Islam’s way and do not let them transpire in this holy organization because our dear Imam Khomeini said: any group and party nor good or bad must not enter to Sepah.

Martyr Mustafa Dehqani Dastjerdi writes: I know the Sepah as my mosque and consider its holiness as holiness of the House of God because Sepah is a bridge that the steps of martyrs is on it.

Martyr Abdul Hamid Husseini also in a letter said to his small brother: little Amir! My sugary brother! years later, when you read this will, be aware that my schools is school of martyrdom and my religion is the religion of blood and from the day that I attended to Sepah Pasdaran I realized the meaning of being in Hussein’s (a.s) army.

Martyr of religion and knowledge

Story of Life of Martyr “Rasoul Heydari”?, the First Iranian Martyr in Bosnia