Imam Khamenei's message on the passing away of Ayatollah Hashemi Rafsanjani

The following is the full text of the message delivered on January 8, 2017 by Ayatollah Khamenei, the Supreme Leader of the Islamic Revolution, on the demise of Ayatollah Rafsanjani. 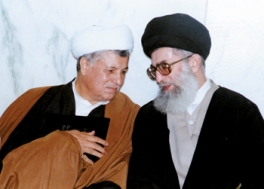 The following is the full text of the message delivered on January 8, 2017 by Ayatollah Khamenei, the Supreme Leader of the Islamic Revolution, on the demise of Ayatollah Rafsanjani.

In the Name of Allah, the Beneficent, the Merciful

It was with grief and regret that I received the news of the demise of my old friend, my comrade in arms and my associate during the Islamic revolutionary movement and my close colleague over the course of many years in the Islamic Republic era – Hujjatul Islam wal Muslimeen Hajj Sheikh Akbar Hashemi Rafsanjani.

The loss of a comrade in arms and associate with whom I had a 59-year experience of cooperation, harmony and collaboration is difficult and excruciating. What difficulties and adversities occurred to us in these decades and what cooperation and collaborations we had together in many periods of time on a common path that was marked by diligence, endurance and risk taking!

His abundant intelligence and his unique sincerity in those years was a reliable source of support for all those who worked with him, particularly for myself. Differences of opinion and varying "ijtehads” at certain stages of this long era could never break a bond of friendship whose starting point was in Bayn-ul-Haramayn [the area between the two shrines of Imam Hussein (a.s.) and Hazrat Abbas (a.s.)], in the holy city of Karbala. And the temptations of devils which were seriously and arduously trying to take advantage of those differences of opinion in recent years, could never influence his deep individual affection for this humble person.

He was a peerless example of the first-generation of fighters against monarchic oppression and he was one of those who suffered on this perilous and glorious path. Years of prison, endurance of SAVAK tortures and resistance in the face of all these and then crucial responsibilities during the Sacred Defense Era, the chairmanship of the Islamic Consultative Majlis and the Assembly of Experts and other such responsibilities are some of the bright pages in the eventful life of that old fighter.

With the loss of Hashemi, I know no other personality with whom I had such a common and long-term experience in the peaks and valleys of this historic era.

Now this old fighter is in the presence of divine accounting with a performance sheet which is filled with diligence and various activities and this is the fate of all of us officials of the Islamic Republic.

I beseech God from the bottom of my heart to bestow His forgiveness, mercy and clemency on him and I express my condolences to his dear wife, to his children and brothers and to his relatives.

God’s forgiveness be upon us and upon him

You Have Lots of Infantry