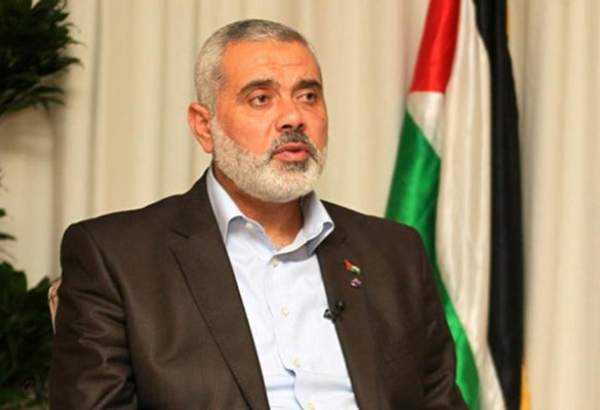 NAVIDESHAHED: The trip marks Haniyah’s first trip outside Gaza ever since he took over his current post in 2017. Egyptian authorities, who control Gaza’s Rafah crossing, had not allowed Haniyeh to exit Gaza.

During the press conference, Haniyeh said that no "communication channels” exist between the movement and the Trump administration despite numerous American attempts to contact Hamas.

The political bureau chief added that given current circumstances related to the so-called "deal of the century” and the current US administration, talks were currently not possible between the two sides.

Also during the briefing, Haniyeh expressed gratitude for the support of countries like Turkey, Qatar and Iran towards Gaza and the resistance movement.

The political bureau chief described relations with Tehran and Hezbollah to be in good conditions, adding that he wished to develop deeper ties with Iran.

Haniyeh also said that Hamas is seeking to renew warm ties with Damascus by developing mechanisms for negotiations between the two sides, despite currently having no ties with the Syrian government.

Hamas ruptured its ties with Damascus in 2012 after anti-government protests took place in the country.

The protests, however, quickly gave way to what became an all out foreign-backed terrorist insurgency across the country.

The insurgency, which led to the emergence of the Deash Takfiri terrorist group in Syria and Iraq, was, however, gradually pushed back largely due to the advisory and military assistance of allied countries and movements such as Iran and Hezbollah.

Also during the press conference in Istanbul, Haniyeh said that the Hamas has managed to bypass major hurdles targeting Gaza, such as withstanding economic hardships imposed on the strip and defeating Israeli attempts to defeat the Palestinian resistance.

The operation was, however, short-lived as Palestinian resistance groups fired hundreds of rockets into Israel, forcing Tel Aviv to submit to ceasefire conditions set by the Palestinian forces.

Haniyeh’s trip to Turkey comes as Hamas is marking the 32nd anniversary of its establishment.

It is believed that Haniyeh plans to go to Russia after leaving Turkey.

Hamas, along with other Palestinian resistance groups are regarded to be part of a larger regional formation of countries and movements opposing foreign-backed intervention and western-backed terrorist groups in the Middle East region known as the "axis of resistance".

Hezbollah, Yemen's Houthi Ansarullah movement along with the states of Syria, Iraq and Iran have been described by observers as key actors of the regional axis.
Tags:
martyrdom ، gaza ، navideshahed
Subscribe to newsletter