On September 4, 1978, the Eid al-Fitr prayer was held by Ayatollah Dr. Mohammad Mofateh in Gheitariyeh hills and after the prayer, the worshippers held the biggest demonstration as well.

Thousands of female and male worshippers moved towards the center of the city after hearing the speeches of Hojjat Ol Islam Dr. Mohammad Jawad Bahonar.
The Exclusive report of Navideshahed regarding this issue has been mentioned bellow: This demonstration was planned so firmly by a group of revolutionary agents under the leadership of history making invention of Ayatollah Mohammad Mofateh who was active in Ghoba Mosque at the time. In a way that martyr Mofateh is remembered as the mastermind of that event. He had been able to lead the people towards the accurate goals during the Ramadan month in Ghoba mosque. The Eid al-Fitr prayer and the demonstration after that made it into a very great protest against Pahlavi’s regime.

The Eid al-Fitr prayer of September 4, 1978 existed for all the veiled women in the front side and for the first time the Islamic Revolution was something that was asked by the people during the demonstration.

Martyr Mofateh had planned his programs in an expanded level which they would be performed after the demonstration of Eid al-Fitr prayer. It was 9:30 in the morning that the Eid al-Fitr prayer was ended by Dr. Mofateh.

So after the end of prayer, Hojjat Ol Islam Mohammad Jawad Bahonar  gave speech about the Islamic movement and the uprising of Muslim people of Iran. 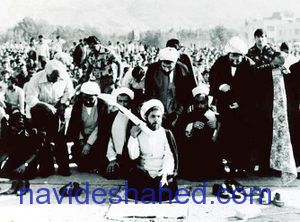 According to the reports of SAVAK forces that were obtained after the victory of Islamic revolution, the number of the protestors would be added moment to moment in Gheitariyeh hills.

In the report of SAVAK forces it had been mentioned that the speeches of Bahonar ended at 9:45 and he criticized against the government and he provoked the people to protest against the government. After that Dr. Mofateh started his speeches and now he is giving speech. Meanwhile the population has reached 14000 persons in Gheitariyeh. Signature Barniyanfar

According to the planning that had been done by Ayatollah Mofateh, it was really necessary that after the Eid al-Fitr prayer a demonstration to be held in a very huge level and therefore the Eid al-Fitr prayer needed to be started and ended without any violations; that is why martyr Mofateh used the technique of inviting people to discipline  to se a peace there; while in another report of  SAVAK has been mentioned: "The abovementioned person (Mofateh) in his speeches declared that we don’t accept anyone as the spokesman of the clerics except Mr. Khomeini and we have said this issue to the foreign correspondents as well. He also invited the people to consider the Thursday as a day of sympathy and to close their shops and at the end he criticized the government and he called the people to have discipline and peace.”

According to the previously managements, the same as the protests which took place from his house to the place where the prayer was supposed to be held, this time also after the end of Eid al-Fitr prayer, at first the people recited the formal of praise and after that they chanted the mottos of Eid al-Fitr prayer. But after a few minutes some revolutionary mottos against Shah’s regime and Pahlavi’s regime were started. So that the worshippers population held some placards in their hands which they had been already prepared and they moved towards south from the street of Dr. Shiriati.”

The Etellaat Newspaper on the next day wrote: "The great crowd of Tehran people in one of the northern places made a very strong and firm demonstration. The movement of worshippers was done towards south, east and west of Gheitariyeh neighborhood by chanting the mottos ‘Allah O Akbar’ (God is great) and God bless Imam Khomeni and by sharing some announcements.
During this demonstration, the people were asked to hold another demonstration on September 6 and September 8 as well. The SAVAK forces beat martyr Mofateh so hard and on the next day they arrested him and they imprisoned him for two months.

In fact it was the biggest show of revolutionary power during the Eid al-Fitr prayer in Tehran city. In the four parts of Tehran, four public prayers were held. The demonstrations which began at 8:00 o’clock in the morning was ended after 9:00 o’clock at night while a very huge population had walked the long path of north to south of Tehran. When the people passed the old road of Shamiran, Takht Tavoos St, Abbas Abad St, Pahlavi St and Square 24 Esfand, finally the crowds dispersed in Train Station square which lasted for more than 12 hours. The main request of the people during this protests was an Islamic government and the freedom of all the political prisoners.
At the end of this protest, on Thursday, September 7, 1978, a public holiday was announced in order to remember the martyrs of Zhaleh Tehran Square, Mashhad and Qom. The people would invite each other to take part in the demonstrations on that day. On this day, Ilam city had four martyrs as a very strong conflict between the people and the security forces. The people of Hamedan broke the statue of Darius and in other cities of Iran some Eid al-Fitr prayers were held and following the prayers some anti-governmental protests and demonstrations were held as well.

The grand Ayatollah Khomeini for the great demonstration of Eid al-Fitr prayer had addressed the nation of Iran and he issued a message which was shared in different places of Iran so immediately. In a section of this message has been mentioned:

I would like to congratulate the great and holy Eid al-Fitr to the Muslim and brave nation of Iran. The Eid of this year was followed with implementation of some epics and movements by different parties of the Iranian nation. The great nation of Iran will continue its movements and it will never be weak and it will never give up its way. You should be confident that you will win by the assistance of God (God wiling). After the Ramadan month you should never think that your mission is ended. You should never listen to the deceiving and false words of Shah and his government and his few fans, because they only lead you to the devil and evil activities. Also on this day, the government issued some announcements that was read and broadcasted several times from the radios and televisions and they were printed in the newspapers as well; so they prohibited and banned any type of rallies and protests in all around the country.

A review on the Eid al-Fitr prayer of 1978, the Political Studying and Researches Institute
The Light Scriptures, Imam Khomeini, third volume