News ID: 385725
Home » Public
AA
The Story of Chemical Attack against Halabja based on the narration of 2 war veterans after 23 years:

A Cradle that Stayed Safe and Sound after the Chemical Bombardments

Among the smoke and explosion, when you would see at any direction you would not see anything except sorrow, helplessness and depravation. A man was walking toward the damaged debris. 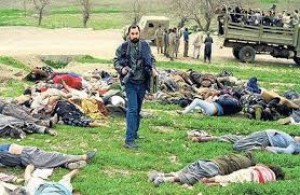 Navideshahed - 23 years passed from the chemical bombardments which were directed against Halabja city. Reminding the realities that occurred for this city is something which can be done by narration of two war veterans who observed the scenes during the attack. Indeed it could be considered a review of historical events which will never be forgotten.

He continues: We had gone through many ups and downs during the military operations. I was an authority for medicine affairs of the Army 8 of Najaf which would be commanded by martyred Commander Kazemi.

This reinforcement fighter of the Iran-Iraq war era regarding the moments that he was present in the war says: On the backside of Halabja was indeed an emergency place for our frontier fighters, so that injured patients of Halabja would be taken there to receive treatment and after initial medical cares, they would be sent to hospital by helicopters.

He continues: Though 23 years have passed since that time, but I can remember it so well that the families would ride on tractors, armored tanks and come there and in some cases they would come there by foot.

There was a little kid that was in a cradle was one of the persons that had been targeted by chemical weapons.

The Iraqi Baathist forces had employed chemical weapons against women, children and elderly.

He adds: When the people of Halabja would come to that emergency place to receive treatment some of them would fall down due to tiredness or due to consequences of chemical weapons. Many of them would be martyred when they would arrive there, so we could do nothing for them because of their critical health conditions. I can remember it so well that those who had survived were digging holes as graves to bury the bodies of martyrs. The number of injured patients was so high and we could not take all the injured patients to hospital by helicopters.

Seyed Hamid Reza Abdol Matlabi Monfared who went to the Iran-Iraq war at the age of 13 as a Basiji fighter regarding this issue says: During the years that I was present in the war until 1988 I took part in different military operations and I served as sniper, R.P.G shooter, Wireless server, Boat Steersman, medical assistant and missiles director. During my presence in the war I got many experiences because I had taken part in different military operations and I had accomplished many ups and downs.

He continues: I can remember that for the purpose of reaching the top of Kachleh Mountain during the military operation Valfajr 9, we were climbing and walking for three days. When we arrived to the top, the presidential guard of Saddam Hussein attacked us for three times and though we did not have so much equipment, but we resisted and we were able to push them back from there.

Regarding the chemical bombardments which had been directed against Halabja he says: It was 1988 when this disaster took place. I had gone to the Islamic Revolutionary Corps of Paveh Headquarters and I was working in the Engineering section as electrician, but eventually they told me I should work with the wireless server. I benefited of short term training about wireless system and then we got prepared to launch the military operation "Valfajr 10".

This war veteran continues: on that day we entered Halabja through Markhil and stationed in Biyav city. The Iraqi Baathist forces gassed Halabja and due to the effects of wind, the region was under danger of contamination. All of us would struggle not to retreat despite of the damages which would threaten us.

It was 10 o'clock in the morning when the Iraqi Baathist forces employed chemical weapons against Halabja. The defenseless people of Halabja were victimized with chemical weapons. The Iraqi forces wanted to push back Iranian forces from that war zone.

This chemically injured patient says: Iraq had increased the intensity of its chemical attacks. After a while when I moved forward, I felt that I have been exposed to chemical weapons. My foot had turned dark and many blisters had appeared on my skin. The Iraqi forces had dispersed mustard gases in the war zone and this gas commonly inflicts respiratory problems and recurrent lung infections, progressive eye lesions that can lead to blindness, and itching sores and scars on the skin. Despite of mustard gas, the Iraqis had employed three other types of chemical weapons as well to kill or stop Iranian fighters and people of Halabja. We arrived to Halabja within two hours.

What was going on in the city of Halabja?

Seyed Hamid Reza Abdol Matlabi Monfared adds: We were equipped with protective masks and uniforms, but due to a rock explosion my uniform was torn and my foot had been darkened due to the effects of chemical weapons, despite of this issue that only thing that I did not think about was me myself.

When we arrived to the city of Halabja, we firstly saw the deaths of animals, but we moved forwarder and we decided to help the civilians. We would put the people under the taps of water immediately and we would use anti-asphyxiation medicines for them.

The first job that we did was calming down the situation and to bring comfort for the people.

We would try to keep people calm and to decrease their blisters by injecting ampoules. We were not reinforcement troops, but at that time each of us would do something more than what a reinforcement fighter does; that is why fortunately we were able to rescue many lives.

This war veteran who had stayed in the war zones for six months says: Though I myself had been exposed to chemical weapons, but I stayed there, indeed the situation did not allow us to leave the battlefields. My family had no knowledge about my situation and I would not respond their letters too. I didn't want them to be worried about me.

He says a memory about this issue as follows: I can remember that one of my comrades that was a soldier was so happy that his military service is finished, but when he went for furlough, he was informed that 4 months additional services have been added to his military service. He returned there once again. We were supposed to bring some munitions from Iraqi rifle pits. He went to a house and he found a bicycle that he had found out and he rode the bicycle. I can remember that as he was pedaling, suddenly the Iraqi forces employed chemical weapons and he was chocked simultaneously.

He says: such moments were not rare for us. There were some moments that our hands and feet had no power to move. I can remember that a battalion that was serving near us had been exposed to poisonous gases, I could see that we could not help them, but they were groaning in pains, but gradually their voices would be stopped (they would be martyred). Bitter moments would cause that we cry in tears.

Sadeghi the reinforcement fighter of the bitter moments regarding one of the sweet memories says: In the emergency center that was near Halabja we were doing health cares on the patients, suddenly one of the Iranian tanks arrived there. They brought out a 1/5 year old kid. All the family members of that kid had been killed, but this little kid had survived because he was in a cradle. I can remember it well that the correspondents and photographers provided reports about this kid.

All of us repeated this poem which says: "If my protector his God, he knows how to protect glass near stones.

I thought that the kid will die. We took him to the emergency center immediately. We feed him a little juice, suddenly he started crying. We sent him to the backside of war. It was really surprising that among lots of dead bodies this little kid had survived.

This chemically injured patient says: I can also remember it so well when we would enter the houses of Halabja to rescue the people, we entered a house that all of its family members had passed away. We opened a commode and we saw a 4-year-old boy. I hugged him and I took him to the reinforcement troops.

The boy said: his parents had put him in the commode at the final minutes of chemical bombardments and he had survived.

Many days have passed, months have passed and years have passed, but this event and tragedy will never be forgotten. Each year that passes your innocence becomes a frame for my heart's window. If I were not with you at that time, but now I know that by keeping alive your remembrance I can reach victory.