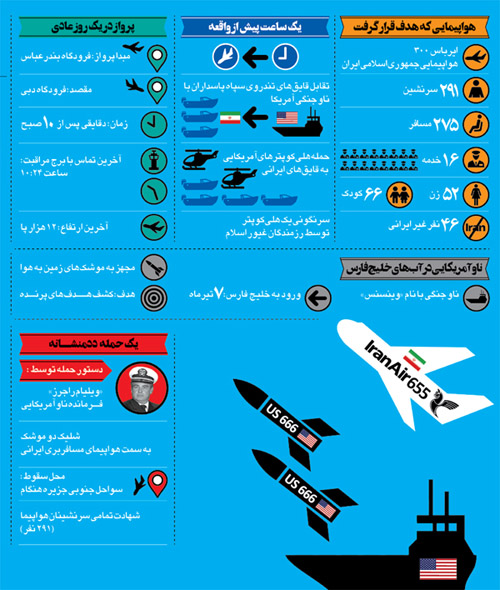 The imposed war wasn’t finish yet and the martyrdom sorrow of many men and women were latest that a new event was happen and amazed the world and record another disgusting crime in USA’s dark workbook.

12the of Tir of 1367 an unbelievable event accrue in history of world arrogance against liberalism nations. Iranian passenger’s plane was hit by USA warship and overthrown.

American’s officials firstly announced that they hit an Iranian F13 plane and claim this was a wrong mistake. They accused that Iranian plane was out of authorized airspace and claimed American warship warned this plane for seven times.

What was the reactions?

Islamic Republic of Iran called for an urgent hearing of the Security Council, ICAO Council and The Hague Court. International institutes, because of USA influence and forces, only regretted about this issue and didn’t done anything influential.

Jorge Bosch the Vice President of USA said: I never apologized from USA’s side.

William Raggers the warship’s commander said: if hundred times this happen I would again commanded for hitting.

· Appearance difference of passenger Airbus planes with F14 fighter planes is obvious even for common people, which it is clear even with unharmed eye.

· According to advanced equipment of this fighter warship likely made impossible mistakes in distinguishing the type of planes.

· Falling of this plane in beaches of Hengam Island shows that this plane was in territory of Iran and not in international borders.

· American warship could with conversing with the Iranian pilot notice that it is a non-military plane.

What was USA’s purpose?

· Helping to Iraq for escaping from multiple failures in Iran and Iraq war.

· Forcing to Iran for accepting the peace and finishing the war.

Who was the Baathist Regime of Iraq Indebted to for Providence of Chemical Weapons?

The literature of war for the children and the young people, Yes or No?/ Hojatollah Mozafar Salari