News ID: 385232
news » Interview
The story of a bride who her groom (Hussein Hariri) became a Shrine Defender and became martyr

“I couldn’t stop him”

The story of a bride who her groom (Hussein Hariri) became a Shrine Defender and became martyr. 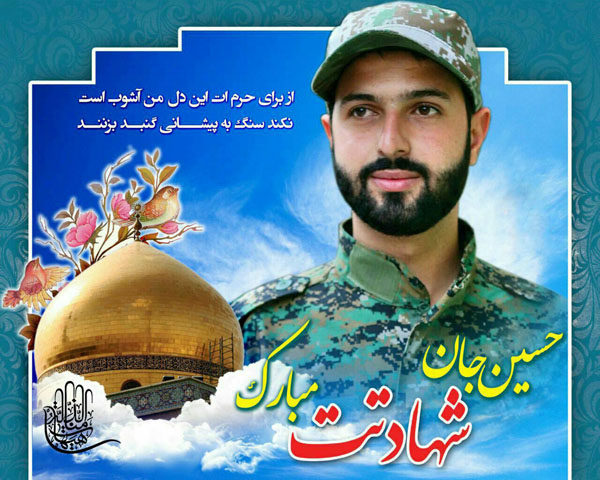 The story of a bride who her groom (Hussein Hariri) became a Shrine Defender and became martyr. Zahra Sadat think in this way and among disbelief of others she is satisfy with getting marry with a sensational youth who was passion for defending from Shrine of Shi’a’s Aunt (Zeinab Kobra).

This bride is different with other brides. She is not even after regular wedding things. She even didn’t had any conditions for her marriage and happiness. She accepted a condition and put step in a path that anyone who cannot make it.

The eyes of relatives were on lips of the bride, is she saying "Yes” like other brides or in the last moments would change her mind? Finally, who is going to marry with a youth who isn’t thinking to living? If the girl would change her mind in the last moments nobody would blame her. She have only 19 years old, maybe she is giving up to love, but how her family accepted this marriage?

Among all disbeliefs and doubts a sound raised and that is the satisfaction of the bride because she had a covenant with her God. This satisfaction is a guarantee, like the promises of Hussein (a.s) with his God. This is a "Yes” to a belief that a man departed from all his attachments and affections.

Zahra Sadat think in this way and among disbelief of others she s satisfy with getting marry with a sensational youth who was passion for defending from Shrine of Shi’a aunt (Zeinab Kobra). She shows to everyone that she is agree with conditions of her groom and she didn’t want to be an obstacle against defending from Holy Shrine.

But how could she love a person who wants to leave? How could she want to establish her dreams on a bubble that any time might vanish?

Our "Ones upon times” of our children’s stories is effected in life of Zahra Sadat and Hussein. The day that Zahra Sadat accepted to tide up her life to Hussein’s life, she got the permission for martyrdom in the day of Ashura. But Zahra Sadat narrated in a different way. These two beloved pigeons, when decided to live with each other became unify, an eternity without repeating which, even Takfiri’s bullets couldn’t do anything. They wanted to stay with each other and haven’t any fear from anyone except God. Now, when one of them went to heaven the love of other one is still remain.

Zahra Sadat said: "the condition of Hussein was that I don’t prevent him for defending from Shrine of Zeinab (a.s). His purpose was defending and not martyrdom. He wanted to be a defender for the Shrine and if he became martyrdom it was the Will of God. Then why I must stand against the God’s Will. Conversely I have this believe that death of human is with God’s willing, when its time arrived whenever you be, no one could stand in front of it, neither you be at your home nor in the war. So against others’ opinion I selected living with Hussein not being wife of a martyr.”

When she reach to this position, she flat her voice that lest my mind that she is falling in tears. "I am a Shi’a. I am Sadat, always I dreamed to defend from the Shrine of Holy Aunt (Zeinad a.s), when Hussein said about love of defending, I became happy and I accepted gladly.

But practically how I could send my men to war while we were married only for one month and returning was difficult. But how could I prevent? In that case I took help from love of Hazrat Zahra (a.s) while I had the dream of leaving. I decided not to prevent him. It was difficult to want Hussein for myself then in the doomsday I would be ashamed of the Shia Aunt (a.s), I leave everything to God that He do the best for me, even if nostalgia would take my breath.”

She took a deep breath and she smiled, that kind of smiles which is sorrowful than any kind of crying and then she continued: "it was one month that we were married, Hussein was very nervous and he was only thinking to going. He heard martyrdom’s news of his friend and became more restless. One night he said to me: I couldn’t stay any more. I am going to take dispatch permission, pleas pray for me. I remember that night carefully. We went together, I saw from inside the car that Hussein is insisting. When he heard negative answer he became more impatient and insist more. He still insist and finally took the permission of defending. It seems he is flying, he was happy and free, but I was restless in a way that I couldn’t speak. I only trust in God that only He make me calm. While Hussein was 27 years old left the world for others and freely went to Tehran which, after that dispatch to Syria.

No!! who gave you permission? You became recognize. It is impossible that we dispatch you. Your photos are published, your dispatch is equal with martyrdom….

What recognition? What happened? Haj Agha! You let me go, it won’t happen anything wrong…

The family of one of the martyrs inadvertently publish you and their martyr’s photos, unfortunately you became recognized, it is impossible to go, we cannot risk on your life, nobody go there for death, my brother!

These words hurt Hussein a lot. He continual repeated with himself that what is recognizing!! "I bear all risks, the lover is not coward, and everything is with God’s will.”

Staying one month in Tehran couldn’t change the mind of officials to dispatch the commander of destruction. When Hussein returned, he wasn’t the pervious Hussein. A feeling like nostalgia was in his heart. He couldn’t stand insulting to the Shrine of Zeinab (a.s). He believed if he remain the posterity would curse him which, he acted same as Kufa people in the time of Imam Ali (a.s).

A few months passed and every day was harder than the day before. It seems his life had deteriorated. About 4 month after their marriage, Hussain again spoke about going. The love of Ahlol Beit (PUT) made him brave. No one knows how he get the permission for dispatch. He collect its stuffs to go. But this going was different with others. It seems his farewell with others was genteelly. When was the turn of Zahra Sadat Hussein’s tone changed, he tried to sympathy with her and he didn’t speak about coming back. Hussein didn’t invite her to be patient and confidently said: "if I became martyrdom Hazrat Zeinab (a.s) would gave you patient.” His words was heavenly, he wanted from Zahra that when he hear the news of his martyrdom do not cry much. Do not let any stranger hear her crying. But is it possible not becoming nostalgia? Is it possible not crying for parting sweetheart?

However Hussein was also thinking to this situation: "if you are nostalgia go to the Roze of Imam Husein (a.s) and in there cry for me also.” Then he recommended her for her Hijab: "do not become tired if everyone were against your beliefs you remain on your faith.”

Hussein went to Aleppo’s base. In this time the commander of destruction do his best to protect from the Holy Shrine and in a war with Takfiris became martyr.

When the sound of Salavat raised Zahr run to the yard. A few women had Qur’an in their hands and approached to her, "Dear Zahra, God has accepted your present, and your husband joined the group of martyrdoms.” When everyone started crying she remember her husband’s will, so she said to others: "martyrdom is the best event of Hussein’s life, although he didn’t go for martyrdom but he deserve for martyring.”

She was wishing for rain, she reviewed all her memories. She remember Hussein was read the verse of martyrdom for her. He was saying that in the day of Ashura after mourning for Imam Hussein (PUH) he read Qur’an and the verse of martyrdom was opened. The weather doesn’t want to stop. Her love and heart is rainy, but her soul is full of patience and her eyes wont rain, her faith stand her.

Investigation in veterans’ affairs in priority of tenth parliament