Iran Carrying Out Defense Missions within, beyond Borders

TEHRAN (Tasnim) – Chief of Staff of the Iranian Armed Forces Major General Mohammad Hossein Baqeri hailed the success of the Armed Forces in pursuing defense inside and outside country. 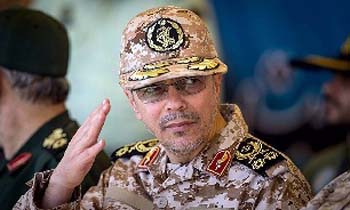 TEHRAN (Tasnim) – Chief of Staff of the Iranian Armed Forces Major General Mohammad Hossein Baqeri hailed the success of the Armed Forces in pursuing defense inside and outside country.

The Armed Forces have "pursued defense and security missions for our Islamic country with full power within, along and beyond the borders,” the top commander said on Tuesday.

He referred to the regional developments in recent years, including the crises caused by terrorist groups such as Daesh (ISIL or ISIS) in Syria and Iraq and said by looking at these developments one can recognize the important role of the Iranian Armed Forces in maintaining security in the country.

Iran is in "the most crisis-hit region of the world and exposed to the most severe and wide-ranging threats, either by the criminal US, the Zionist regime (of Israel) and their reactionary regional allies or by Takfiri terrorists…,” Major General Baqeri said, underlining that, nonetheless, the Islamic Republic’s Armed Forces have been successful in countering the threats and carrying out their missions very well.

The result of these endeavors is the security and peace that exist in the country now, he added.

Despite being in a volatile region, Iran enjoys high security and peace within its borders thanks to the competence and proficiency of its Armed Forces and the intelligence and security services.