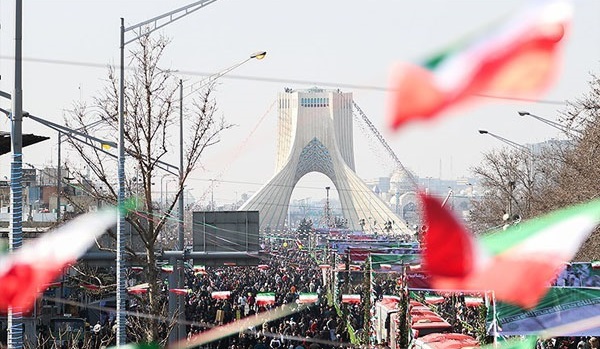 NAVIDESHAHED: Millions of Iranians from all walks of life were out in the streets and squares all over the country to express their support for the cause, aspirations and ideals of the Islamic Revolution.

In Tehran, hundreds of thousands converged at Azadi Square, the capital's main square and the site of major national rallies over the past four decades.

In addition to the annual theme of renewing support for the revolution and Islamic establishment, this year rallies are important after the propaganda launched by the western media against Iran over the recent economic unrests in the country. This year ralliers shouted protest at the US and its allies for both their pressures and cruel sanctions imposed against the country as well as its so-called 'Deal of the Century' on the Palestinian issue.

Yet, what has made this year's rallies even more important is the call by the high-ranking Iranian officials on people to give a crushing response to the recent threats of US President Donald Trump by staging massive rallies even larger than ever.

Meantime, the ralliers in Tehran hung effigies of US President Donald Trump and Israeli Prime Minister Benjamin Netanyahu in a show of hatred for them.