Navideshahed: When we noticed that the tough work of surgeries lasted for one and half months and almost 800 surgeries were done and we had not taken shower at all, we thought about this issue that we return to the village ourselves in order to check how they would bath. 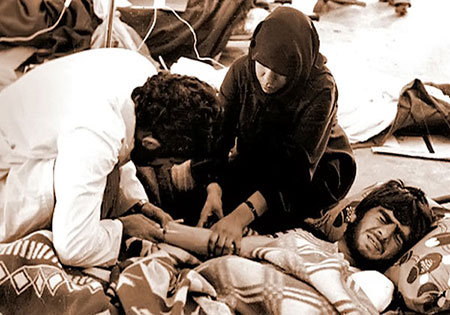 During the Sacred Defense Era, different classes of society with varied expertise and skills would play significant roles in order to defend the Islamic Republic of Iran’s territories. Each person stood up against the enemy by  the scientific or practical experiences that they had in this field.

In this regards, the medical society especially different fields according to the ethical charter that they had been sworn with helped the war veterans with all the materialistic facilities that they had and they got present in the battlefields. They got present in the war in order or relieve and ease the pains of the injured patients by doing some tough surgeries. They conducted those surgeries under the most difficult situation. In fact doing the surgeries under those tough moments is something great. ‘Wandering in the Strange Land’ is the book which reviews the memories of Medical Society regarding the Sacred Defense Era, and two memories of that have been mentioned as follows:

When we noticed that the tough work of surgeries lasted for one and half months and about 800 surgeries were done and we had not taken shower at all, we thought about this issue that we return to the village ourselves in order to check how they would bath. Their bath consisted of a small water tanker which would be warmed up with woods and also a cold water tanker had been put near that and the taps of the cold water and hot water would be joined to two pipes which would be attacked to the shower. It was a simple and useful system.

We also prepared our bath within one or two days in the same method. After passing this long time, taking a warm shower was really interesting in the war zones. In fact it was a blessing which would not be compared with the biggest blessings of the world. We had been so light in a way that it seemed we had two wings to fly. Now each time that I think our hairs had become the same as rope so firm and dried, I get a bad health condition.

On one of the days, they brought an Iranian soldier to the hospital. He had a very critical health condition. We started our work so immediately. We took him to the surgery room along with the medical equips and auxiliary nurses and anesthesiologists. The surgery room located in the heart of a mountain; also there were only little facilities. This soldier’s stomach and sides had been injured and it was blooding. We firstly revived him and after unconsciousness, the laparotomy surgery was done successfully.

Anxiety and concerns had covered me, because the soldier had so much blooding in a way no next surgery was possible for him. I thought about this issue that whether I could save him in that far remote mountain that was close to a village?

I put his right kidney that had got out from his body into his body. It had been exposed to fecal pollution. We were so worried about him to gain his consciousness. Despite of all the efforts that had been done for him in the best form by the medical team, even having 10 % hope of survival was so much for him and we did not expect him to come round anymore.

Eventually the first symptoms of consciousness appeared. After that the medical team including the physicians and nurses got so delighted and happy when they saw that condition. After two days passing from the surgery, the special health cares were done and after prescribing medicines and reaching the ordinary health condition of the patient, due to receiving better health cares he was supposed to be sent to the other hospitals located in the civilian areas; Along with the assistance of three medical assistants and the local Kurds, we moved towards Iran by foot by putting him on a stretcher. It lasted for one and half day that we reached the borders. Fortunately according to the good health cares that we had done for him, we were able to take him to the borders safe and sound and we handed him over to the Army forces.