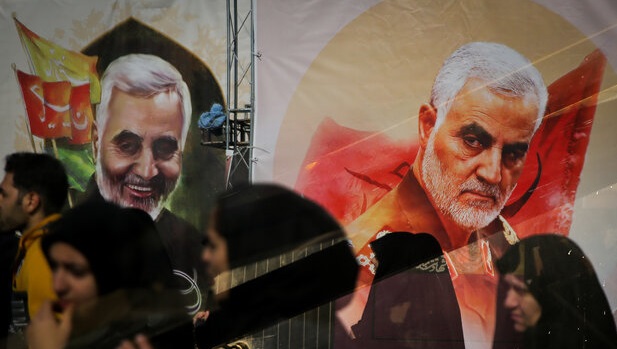 Without any introduction, you are cordially requested to think about this issue that your statesmen and officials [American officials] actually call Lt. Gen. Qasem Soleimani as leader of terrorists in Iraq like Abū Bakr al-Baghdadi al-Qurashi [an Iraqi-born leader of the Islamic State of Iraq and the Levant (ISILS)] that he should have assassinated long ago in order to prevent outbreak of any probable risk and danger for the people of that country [Iraq], region and especially American people but if the entire nation of America was thinking a bit like you [Messrs. Michael Moore and Robert De Niro], undoubtedly, there would surely remain questions that your statesmen and politicians would have to answer.

For example, why is it so strange in the world that, firstly, according to American politicians and statesmen who believe Gen. Soleimani is a terrorist, Iraqi Prime Minister Adel Abdul Mahdi participates in the funeral procession of Gen. Soleimani in Iraq with crying eyes and instead of expressing happiness and joy, he announces three days of public mourning for him [Gen. Soleimani] in Iraq and issues message of condolences.

Why legislators and deputies in the Iraqi Parliament, ranging from any party, race and ethnic, (All Representatives in Iraqi Parliament) suspend their official meeting in the Parliament on Saturday to another time in order to participate in the funeral procession of Gen. Soleimani who American statesmen and politicians believe him [Gen. Soleimani] as a terrorist.

More importantly, the next day of assassination of Gen. Soleimani, (despite $1 trillion worth of fine set by the US government), a bylaw is ratified in Iraqi Parliament demanding for the expulsion American forces from Iraq and announces it to US Envoy to Iraq immediately.

Your statesmen and politicians [American officials] can tell you [Robert De Niro, Michael Moore and American people] why Gen. Soleimani is a popular figure among a nation that he has assassinated them? Maybe, the whole world is capsized and overthrown and government, nation and representatives of Iraqi Parliament and whole people in the world have become zombies. Maybe, only your statesmen, politicians and your president [Donald Trump] were the last survivors of the world’s knowledgeable people in this apocalypse.

Have your statesmen [American officials] like their liar predecessors in the previous administrations (such as Vietnam War, false excuse of existence of weapons of mass destruction (WMDs) in Iraq and anti-Mosadegh coup and downing of Iranian passenger plane) think about this issue that how much lies they have told to people and consequently, can your statesmen find a reasonable answer to the question that may be asked from them by the next generation and their grandchildren as well?

The great and civilized nation of Iran, the country that your president [Trump] had decided to target 52 cultural centers of the country, attacked US military bases in Iraq’s Eyn Al-Asad in retaliation of assassination of Gen. Soleimani for the following two main objectives:

Firstly, Iran attacked US military bases in Iraq in retaliation of assassination of Gen. Soleimani to show that this country can retaliate and repel any attack. Iran also can attack US military bases in the farthest region in the world but Iran respects the dignity of people with its ethics and humanity and take the two criteria i.e. ethics and humanity into serious consideration. Most importantly, Islamic Republic of Iran, unlike your statesmen [American officials] prevents killing of people. As you may be informed, Islamic Republic of Iran in its battle with Iraq during the eight years (1980-1988) never shoot a chemical bullet but in contrast, the then Iraqi government used chemical weapons against the noble nation of Islamic Iran in this unequal war.

Our country Iran has acted according to your request in separating Trump and other American officials from the noble nation of America in practice and now, it is your time to act on your promise as stipulated in your notes and interviews.

From today, #hard revenge has been assigned to you, other artists, actors and freedom-seekers in the United States. As long as American officials dream of oil instead of humanity, change of governments will not work. However, we, Iranian people, are waiting for your promise but not like the promises as given by your statesmen, officials and politicians.

Habib Ahmadzadeh is an Iranian novelist, scriptwriter, doc-maker, and researcher. Born in 1964, he an MA in ‘dramatic literature’ and a Ph.D. in ‘art’s research’. His works mainly concentrate on the Sacred Defense years and the effects of war on society
Tags:
Soleimani assassination ، Robert De Niro
Subscribe to newsletter