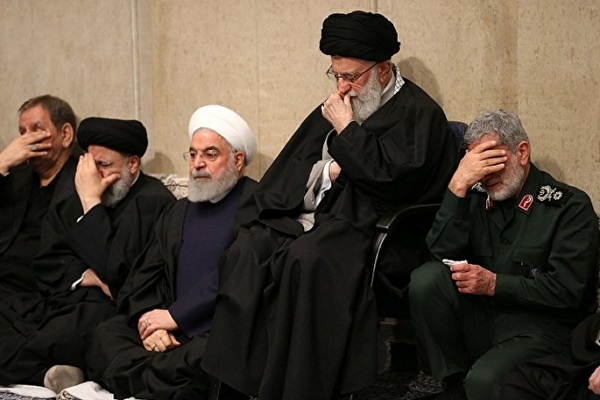 It was organized at the Imam Khomeini (RA) Hosseiniya (religious center) in Tehran, and attended by the Leader and other senior officials, including the president, parliament speaker, Judiciary chief, cabinet ministers and military commanders.

Also present were a number of Iraqi officials, representatives of the region’s resistance movements and ambassadors of a number of countries.

Addressing the event, Advisor of Iraqi National Security Falih Faisal Fahad Alfayyadh on behalf of the Iraqi nation and government offered condolences to Iran’s leadership and people on the martyrdom of General Soleimani.

He also paid tribute to Abu Mahdi al-Muhandis, the deputy commander of Iraq’s Popular Mobilization Units (PMU) who was martyred in the same attack that killed General Soleimani.

A number of Qaris recited verses from the Quran at the memorial service and senior cleric Hojat-ol-Islam Sediqi delivered a speech in which he highlighted Martyr Soleimani’s great attributes.

General Soleimani, the deputy head of Iraq’s Hashd al-Sha’abi (PMU), and a number of their entourage were killed in a strike by American drones near Baghdad International Airport in the early hours of Friday.