Navideshahed: Daughter of IRGC Qods Force Commander Lieutenant General Qassem Soleimani who was assassinated by the US in Iraq on Friday warned families of the American soldiers stationed in the region that they will not be able to enjoy calm and peace anymore as their loved ones will be targeted by the resistance forces. 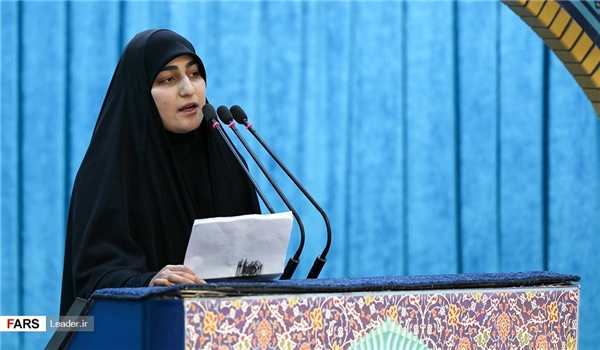 "Yesterday, the Iraqi parliament approved a plan for the US withdrawal. The families of the US soldiers in West Asia who have witnessed the US abjection in battles in Syria, Iraq, Lebanon, Afghanistan, Yemen and Palestine will spend their days, while waiting for their sons' death," Zeinab Soleimani said, addressing millions of mourners who had gathered in Tehran on Monday for the funeral ceremony of General Soleimani.

She addressed Trump who had personally ordered assassination of General Soleimani, and said, "Hey mad Trump, the Gambler! You are the symbol of ignorance and a plaything in the hands of the Zionists. You should not think that everything has ended with my father's martyrdom."

Zeinab underlined continued support for Supreme Leader of the Islamic Revolution Ayatollah Seyed Ali Khamenei, and said each of the Resistance Front leaders in Lebanon, Syria, Palestine, Iraq and Yemen is enough to annihilate Trump and his ruling system.

In relevant remarks, a top Iranian official and former top commander of the Islamic Revolution Guards Corps issued a late midnight warning to President Donald Trump, promising that Tehran will bring Tel Aviv and Haifa to ashes if US dares to reciprocate Iran's reprisal attack in vengeance for the assassination of General Soleimani.

"If the US takes any action after our military response, we will level Tel Aviv and Haifa to the ground," Secretary of Iran's Expediency Council Mohsen Rezayee said minutes into Monday.

Few hours earlier, Iran's missile batteries were sighted on the move to the country's Western borders, starting speculations that Tehran's military action to revenge the US terror attack on IRGC Qods Force Commander Lieutenant General Qassem Soleimani might be in the offing.

Mohsen Rezayee had warned earlier in the week that Israel is likely to have had a role in collecting intel on the flight of the martyred General from Syria to Iraq.

Rezayee's meaningful remarks came after US President Donald Trump on Saturday warned Iran that if it retaliates for the assassination of IRGC Qods Force Commander Lieutenant General Qassem Soleimani, it will face US attacks on 52 targets, a number he said was symbolic.

"Let this serve as a WARNING that if Iran strikes any Americans, or American assets, we have.........targeted 52 Iranian sites (representing the 52 American hostages taken by Iran many years ago), some at a very high level & important to Iran & the Iranian culture, and those targets, and Iran itself, WILL BE HIT VERY FAST AND VERY HARD," he said. "The USA wants no more threats!"

In response, Iranian Army Commander Major General Seyed Abdolrahim Mousavi said that Trump does not have the courage to attack Iran.

"The US will not dare to take any actions against our country,” the Iranian Army commander said.

Turning to the unprecedented and unparalleled measures taken by Lieutenant General Soleimani in the Resistance Front, he said, "Martyr General Soleimani took giant steps in the fight against terrorism in all regional countries, specially Lebanon, Syria, Iraq.”

Lieutenant General Soleimani was martyred in a targeted assassination attack by the US drones at Baghdad International Airport early on Friday morning.

General Qassem Soleimani has been martyred by the US aircraft after lifetime efforts, the IRGC said in a statement early Friday morning.

The airstrike also martyred Abu Mahdi al-Muhandis, deputy commander of Iraq's Popular Mobilization Forces (PMF), or Hashad al-Shaabi. The PMF media arm said the two were martyred in an American airstrike that targeted their vehicle on the road to the airport.

The Pentagon confirmed the attack in a statement.

The attack came amid tensions that started by the US attack on PMF units that killed 28 Iraqi popular forces. A day later, Iraqi people attacked the US embassy in Baghdad. On Wednesday President Donald Trump ordered about 750 US soldiers deployed to the Middle East.

US officials earlier suggested they were to engage in further retaliatory attacks in Iraq.

The developments also represent a major downturn in Iraq-US relations that could further undermine US influence in the region and American troops in Iraq and weaken Washington’s hand in its pressure campaign against Iran.

US President Donald Trump was vacationing on his estate in Palm Beach, Florida, but sent out a tweet of an American flag.

The attack represents a dramatic escalation by the US toward Iran after months of tensions. The tensions take root in Trump’s decision in May 2018 to withdraw the US from Iran’s nuclear deal with world powers, struck under his predecessor