"When The Moonlight Was Missing" 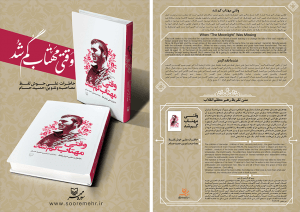 "The children of Hamedan , children of love , sincerity and purity , the great humble men , the companions of Imam Hossein (PBUH), the supporters of God ‘s religion and then the mothers , creators of the brave and patient males and the atmosphere of spirituality and knowledge , the bright hearts , the unflinching determinations and efforts , insights and supernatural visions sweating from this source of honest narration and elaborative writing comes the enthusiastic reader to fruition.
"The narrator is himself a live martyr whose badly-wounded body has failed to wane the verve and vigilance of his heart.” Praise be to God that the writer is also from among those enthusiastic and experienced men. May he and all of them enjoy the grace of God and divine pleasure . God willing . "

. the introduction of the book is itself a poem

It was winter. The whole village was covered with snow. No one could enter the village, and there was no way out of the village. Meanwhile, Esmail’s father got pneumonia. But there was no doctor in the village. The whole family was sitting around the sick father. The younger brother asked Esmail, « Brother, what can we do if our father dies? » Ismail got up. He needed to visit a doctor in the city. But it was winter and the roads were snowy, and it would be night when he returned and there was the risk of the hungry wolves. Some people tried to dissuade Esmail and suggested, "We pray for your father, he will be fine.” But Esmail believed that he should move in addition to pray. He believed he needed to do something…