Iran under the wise leadership of Imam Khomeini mobilized the nation to defend the revolution against Western-backed Saddam’s aggression. 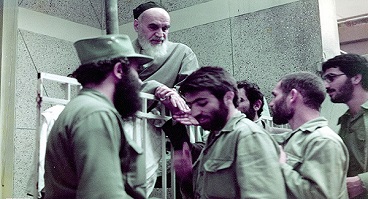 Months after the victory of Islamic Revolution in Iran, Iraqi dictator Saddam began by attacking the oil-producing province of Khuzestan and captured Khorramshahr a month after fighting began. But it was, one historian has written, "a catastrophic miscalculation".
Nor did Saddam secure the mantle of Arab leadership he aspired to, even though the Saudis and the some Persian Gulf states bankrolled the war effort.

Over time Iraqi dictator had enjoyed the discreet support of the west, with the US providing satellite intelligence on Iranian deployments and European countries supplying armaments and raw materials for gas and chemical weapons.

Iran's continuing suspicions of America and Europe cannot be understood without remembering that grim period.

Iranian nation set unprecedented pattern of martyrdom and rendered numerous sacrifices to defend the divine values and the Islamic revolution at the sensitive juncture of history.

Imam Khomeini through his works and speeches explained how a person can attain to the martyrdom rank for the sake of Allah.

While speaking about the martyrdom in the intellect and the blessed path of Imam Khomeini, we should definitely point out to a lot of essential titles which the Imam had stated such as the recompense of the martyr, and how can the person attain to the martyrdom rank for the sake of Allah.

"Above every goodness is goodness, until that time that a person is killed for the sake of Allah. So then when he is killed for the sake of Allah, there is no other goodness greater than this”, by this well-known prophetic tradition which is related to Prophet Mohammad (peace be upon him and his household), Imam Khomeini starts his talking about the martyr’s recompense.

Imam says: "If the writers and the fluent ones and I wanted to count the value and the recompense of the martyrs and the strugglers and their sacrifices and consequences for the sake of Allah, we should confess that we are weak; so how if we want to count the moral degrees and the humanitarian and the divine issues that are related to martyrdom, no doubt that we will feel so confess and slacken”, Imam Khomeini adds saying: "Whatever we say about those who had emigrate from the nature and the present life to go to the Messenger of Allah and have the honor to be in the God’s paradise, we will not give them their right”.

Martyrdom for the sake of Allah is one of the ways in order for you to let God be pleased with you and to be close to him. The concept of martyrdom means to be killed for the sake of a lofty and a noble goal for the obedience of God the Almighty.

God say in the verse: Those who believed and fled (their homes), and strove hard in Allah’s Way with their property and their souls, are much higher in rank with Allah And those are they who are the achievers (of their objects).
Tags:
imam khomeini ، iran iraq war
Subscribe to newsletter