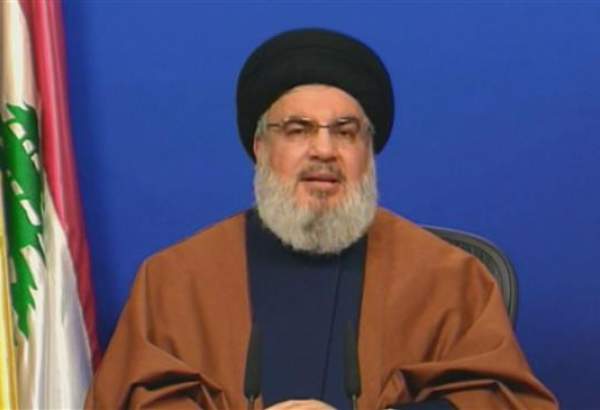 Nasrallah says Hezbollah serious threat for US-Israeli regional schemes
"The US is doing its utmost to depict Hezbollah as a threat to Lebanon. Americans are actually vying for their own interests and those of Israel. The interests of the Lebanese nation are not a matter of concern to them at all. The US is paying out millions of dollars as part of its attempts to sully the image of Hezbollah, yet such bids are all doomed to failure,” Nasrallah said in a televised speech broadcast live from the Lebanese capital city of Beirut as he addressed his supporters on Friday evening.

He added that Washington is lying and disseminating fake news about the recent wave of anti-government protests in Lebanon, noting that US statesmen are exercising such a practice as they are beset with their own problems and desperately trying to get to grips with them.

The leader of the Lebanese resistance movement further noted that the US is unable to sideline Hezbollah and push it away from Lebanon’s political arena, describing Washington’s approach vis-à-vis the Arab country’s domestic issues as "silly and improper.”

"Hezbollah represents a serious threat to Israel’s hegemony and conspiracies. Israel is well aware of the fact that if Hezbollah had wanted to run the (Lebanese) government, it would have taken effective actions against its building of a wall along its shared border with Lebanon and repeated violations of Lebanon's territorial waters,” Nasrallah said.

The Hezbollah leader then called on the Lebanese nation and politicians not to put their trust in the hollow promises coming out of the White House, warning that Americans tend to 'milk' others to advance their own interests.

Nasrallah went on to say that the US and the Israeli regime distort comments made by Iranian officials in order to provoke the Lebanese nation against the Islamic Republic.

"We contacted our Lebanese allies, and they assured us that the reports about Iran’s threat to attack Israel from Lebanese territories are fabricated, and no Iranian official has ever made such remarks,” the Hezbollah chief pointed out.

He underlined that Hezbollah is prepared to destroy Israel in case the Tel Aviv regime makes the folly of launching an act of military aggression against Iran, emphasizing that the Islamic Republic is fairly capable of defending itself and responding to US and Israeli attacks.

Elsewhere in his remarks, Nasrallah called on all Lebanese parties and factions to take quick steps regarding the formation of a new government, noting that a one-party administration will not serve popular interests.

"Our nation needs to stand united in the face of the current crisis. Lebanon needs a government with the largest representation of all factions. The next administration must be inclusive, capable and reformist and steer clear of factional exclusion,” he said.

The Hezbollah secretary general added that his movement had no problem with the government led by now caretaker Prime Minister Sa’ad al-Hariri.

He dismissed reports by certain media outlets that supporters of Hezbollah and the Amal Movement have attacked protesters in Lebanon, terming such accounts as unfounded and cooked up by some Arabic-language networks in the Persian Gulf region.

Nasrallah then called on the Lebanese nation to maintain social solidarity and cooperation in the wake of the ongoing crisis in the country, urging people from all walks of the society to exercise vigilance and restraint.

The Hezbollah leader finally asked Lebanese security forces to remove roadblocks as soon as possible, stressing that no one is allowed to take advantage of people’s livelihoods.

Lebanon has been facing a very tough economic situation because of the failing policies of successive governments, which have led to the impoverishment of the people.

Growth in Lebanon has plummeted in the wake of endless political deadlocks and an economic crisis in recent years.

The country hosts 1.5 million Syrian refugees, and their presence is often blamed for putting pressure on the already struggling economy.

Unemployment stands at more than 20 percent, according to official figures.

The Lebanese Finance Ministry says the national debt is hovering around $85 billion, which accounts for more than 150 percent of Gross Domestic Product (GDP).

Successive governments have also failed to address a waste management crisis or improve the electricity grid, which is plagued by daily power cuts.

On October 29, Hariri submitted his resignation to President Michel Aoun.

Under the constitution, Hariri’s cabinet would stay on in a caretaker capacity until a new government is formed.

The protests began on October 17, when the government proposed imposing a tax on Whatsapp calls, along with other austerity measures.

Protesters in Lebanon have stopped blocking roads and setting up barricades, and instead shifted to holding sit-ins at state-affiliated sites.

They say they will maintain pressure on the political establishment until their demands for the departure of the ruling elite and an end to chronic economic mismanagement and corruption are met.
Tags:
nasrallah ، navideshahed ، isar and martyrdom
Subscribe to newsletter