The Bitterest Memory of Captivity Era 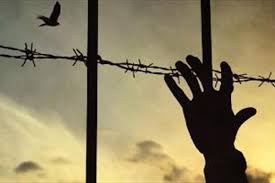 NAVIDESHAHED: The big topics of Iraq’s newspapers at that time had been devoted to Imam Khomeini’s hospitalization. Most of the subjects had been considered regarding Imam Khomeini and the future of the Islamic Republic of Iran. When the prisoners of war heard this news, it was the same as putting salts on the wounds and I can not really explain this sad moment!

In fact all of us has been shocked because we would never imagine that Imam Khomeini to be hospitalized so early like this and to pass way!

Following the tortures, the painful and bitter days, the bitterest day of captivity era arrived and it made all the prisoners of war to deeply mourn for it. I really wished that that day not the sun had risen! Since a few days earlier, the Iraqi newspapers had published the news of Imam Khomeini’s disease and hospitalization. When the prisoners of war heard this news, they got so sad and mournful and they got so worried about the health condition of Imam Khomeini.

The big topics of Iraq’s newspapers at that time had been devoted to Imam Khomeini’s hospitalization. Most of the subjects had been considered regarding Imam Khomeini and the future of the Islamic Republic of Iran. When the prisoners of war heard this news, it was the same as putting salts on the wounds and I can not really explain this sad moment! Due to this issue that we would never imagine that Imam Khomeini to be hospitalized so early like this and to pass way!

In the morning of June 2, when we woke up for the morning prayer, before the calling for prayer and prayer, Mr. Babaniya who was 50 years old and an honest man looked at me and he said: "Last night I dreamed about Imam Khomeini.” And the continued: "In my dream, as Imam Khomeini was laughing sat down on a chair and he looked at me. I could not control myself and my eyes got full of tears and I told him: "Imam, you have got so old broken.” At this time, I observed that he got so sad and I felt that the chair and Imam together flew towards the sky and they ascended to the sky in a way that they disappeared.”

Mr. Babaniya said: "I’m so worried about Imam Khomeini’s health condition, if something bad happens to him, we will be orphan and without father.”

He said the abovementioned sentence and he started crying in tears.

Eventually the morning of June 3 arrived. That morning was so ominous. The demise news of Imam Khomeini had been reached all around the camp of the prisoners of war and it shook the world the same as a bomb. A mountain of sorrow and mourning covered the hearts of broken hearts and lovers and followers of Imam Khomeini. Also his demise made many persons to miss the opportunity of visiting him face to face, therefore this scene was so sad and sorrowful.

The programs of the Iraqi radio had been completely stopped in the camp. Also some of the friends who had sat down in the sanatorium we observed a guard who had been a bit sad and he was walking. He came near one of the prisoners of war who had put his head on his knees and his shoulders were moving due to crying. He stared at him for a few minutes and eventually he said: "In the past, when you would talk about Imam Khomeini and you would consider him everything for yourself and you would support him, I thought that it was only a slogan and motto; but right now I really understand and notice that how much you love Imam Khomeini.” The voice of crying had filled the whole camp and it had lost its control completely.

On that day, the Iraqi Major ‘Mofid’ asked the senior brothers of the camps to come together and he said: "I know that all of you are mourning and bereaving. You are free to mourn and bereave; but you should do it alone and each person can mourn lonely and do not come together for this mourning at all.”

At this situation no one could control himself. Therefore during several nights, even one Iraqi guard did not check the camp, therefore we bereaved for Imam Khomeini in a magnificent and marvelous style.

In the afternoon of June 3, when we entered the sanatorium, the mourning was started. After holding the public prayer, the eulogy and mourning events were continued too. Most of the war veterans had worn black uniforms as a sign of mourning.

Each time that the holy name of Imam Khomeini would be mentioned, some of the prisoners of war would beat themselves as a sign of mourning and bereaving and they could not tolerate such a sad event. On the next day, a very big funeral procession was held in the place of sanatorium 24th and in this funeral procession at first the prisoners of war recited the verses of Koran and it was ended by the mourning and eulogy.

We mourned for 40 days due to the demise of Imam Khomeini.