Davood AMriyan is the writer who well-known figure in the Iranian children and young adults literature. His main interest of subject is war literature. He published his memories of Iran-Iraq war at the age of twenty. Satire and presence of young active and ambitious youths are characteristics of Amiriyan›s works. A lot of his books have been published in Iran and other countries, for instance in Russia. 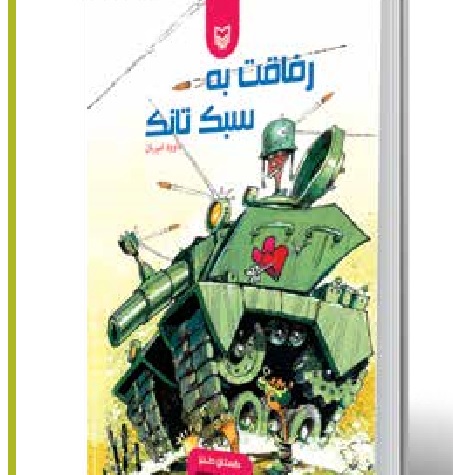 NAVIDESHAHED- Ahmad, a teenage boy with poor physique, wants to go to the front anyway.  Finally, he becomes the success to go to the front and took part in the first operation. It was dark and it seemed to him an Iraqi attacked him.
He was scared and hurt his commander with his rifle.  Ahmad says: Our troop was known as screws and pennants group! I was the only healthy person because I was the newcomer and it was the second time that I had come to the front. All of them have been injured and hurt during the war. One had no hand, the other›s foot was artificial, and the third one had gone half its intestines, and the fourth continued to live with a kidney and half the liver.
One of the kids, speaking in half the tongue that remained for him said,» «Do not be sorry friends, in the next operation, we will gather one or two dozen spare parts from the dead body›s› of enemies like the eyes and ears, liver and kidney and repair the defective parts of our body. The book containing 48 comic stories for teenagers, written by adapting from the book about the memories of an Iranian fighter during the war between Iran and Iraq. Most stories take on a memoir, despite the fact that the author has tried to give them a fiction story.
However, the unique advantage of the main character of the stories is his truthfulness and realism that lies in these narratives. Young and diverse nature of teenagers could be satisfied by reading such special texts and adventures.
The end
Tags:
navideshahed ، Davood AMriyan
Subscribe to newsletter