We are not anti-Semitic; we want the abolition of the Zionist regime

On the auspicious occasion of the birth anniversary of Prophet Muhammad (s.w.a.), the heads of government branches, a group of government officials, ambassadors of Islamic countries and participants in the International Conference on Islamic Unity met with the Leader of the Revolution, Ayatollah Khamenei, this morning November 15, 2019. 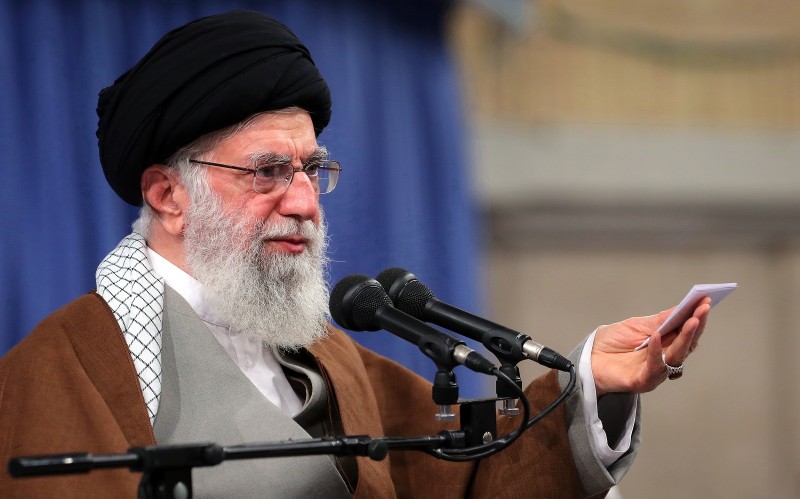 In his speech, he considered the lack of Islamic unity to be the root cause of today’s problems in the Muslim world, especially the regretful situation in Palestine. He insisted that the abolition of the state of Israel means the abolition of the false Zionist regime and the establishment of a government elected by the original owners of the land of Palestine, including Muslims, Christians and Jews. He reminded those present, "The enemies of Islam, with the United States at the head of them, oppose Islam and all Muslim countries. Their main weapon in our region is the infiltration of sensitive, decision-making centres, creating division between nations, and inducing submission to the U.S. as the solution to problems. Enlightenment and perseverance on the path of truth are the solutions to confronting these plots.”

Pointing out that the period from the 12th to the 17th of Rabi' al-Awwal has been termed the "Week of Unity” in the Islamic Republic, he noted that unity is not a political tactic. It is a heartfelt belief in the necessity of the unity of the Islamic nation. He added, "This deeply rooted belief had important supporters even before the creation of the Islamic Republic, including the great Religious Authority for all the Shi’a, Ayatollah Boroujerdi.”
In elaborating on the various degrees of unity, he stated that the lowest level and first step toward unity in the Muslim world is "for the Islamic societies, governments, people, and sects to refrain from attacking and harming each other” and "to be united against the common enemy.” He emphasized, "At higher levels, the Muslim countries must collaborate and create solidarity in science, wealth, security and political strength in order to build a modern, Muslim civilization. The Islamic Republic has made this point its ultimate goal, that is building a modern, Muslim civilization.”

Imam Khamenei stated that the current suffering in the Muslim world, including the Palestinian issue and the bloody wars in Yemen, West Asia, and North Africa are the result of disregarding the principle of refraining from aggression and maintaining unity against the common enemy. He pointed out, "Today, the greatest tragedy in the Muslim world is the Palestinian issue, where a nation has been forcibly made homeless.”

He pointed out the enemies’ efforts at distorting the meaning of Imam Khomeini’s and the Islamic government officials’ repeated insistence on the abolishment of Israel. He said, "We support Palestine and its independence and liberation. The abolishment of Israel does not mean the abolishment of the Jewish people. We have nothing to do with them. Furthermore, there is a Jewish population living in our country in safety.”
Imam Khamenei said that the abolishment of Israel means the destruction of the imposed, Zionist regime and insisted, "The people of Palestine, including the Muslims, Christians and Jews who are the original owners of that land, should be able to choose their government themselves. They should oust the foreigners and ruffians, like Netanyahu, in order to govern their country themselves. And, this will surely happen.”

The Leader of the Islamic Revolution went on to point out that the hostility of the United States, the Zionist regime and the enemies of Islamic unity have targeted all the Islamic countries. He added, "The essence of Islam is the rejection of oppression, arrogance and domination. Therefore, they oppose Islam and all Islamic countries. The assumption that they are only opposed to the Islamic Republic is not true.”

Referring to the Americans' offensive remarks about the Saudis, his Eminence held, "They explicitly say that the Saudis have nothing but money and that they must plunder them. This is open enmity against a country and a nation. The other party should understand their duty, based on Arab honour and Islamic dignity, in the face of such insults.”

In the final part of his speech, his Eminence stated that any remark, move or measure made in favor of "the political, cultural and economic independence of the Muslim nations,” "the unity and sovereignty of the Islamic nation,” "helping the people and the oppressed,” "promoting truths and countering falsehood,” and "spreading science and research, including nuclear energy” to be righteous deeds. He stated that, "Peaceful nuclear energy is needed by nations, but Western monopolists are seeking to keep this energy to themselves. Then, they wish to give it drop by drop to other nations, at the price of their dignity and independence.”

Imam Khamenei went on to say, "The West knows we don’t seek nuclear weapons because of our principles and religious beliefs. Therefore, they oppose the Islamic Republic’s nuclear advancement in order to hinder Iran from gaining science, industry and nuclear capability.”
The Leader of the Islamic Revolution considers the duty of the intellectuals and scholars of the Muslim world to be very important. He emphasized, "Powerfully defend the truth, and don’t fear the enemy. Know that, by God’s grace, the Muslim world is going to see its bright dreams come true in the not-so-distant future.”