How the Iraqi Soldier rode the Motorcycle of the Iranian commander

Navideshahed: Since Seyed Ali had a wireless system in the way, they contacted him and they asked him to be more careful. He was shouting and saying: “I won’t be martyred until the time that I don’t martyr you.” The war veterans said: “Seyed Ali who is on the backside of your motorcycle, do you know him?” 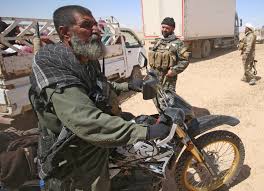 According to Epic and Resistance Group of Fars News Agency, there are many interesting and beautiful narration related to the years of the Sacred Defense Era which might make many of the Iranians to smile. The following sample is one of them:

When the military operation ‘Valfajr 8’ was launched and the Fav city was liberated by the war veterans of Islam, the intelligence forces needed to gather at a place in order to focus on the missions and work that they needed to do in the next phase.

Almost after 4 to 5 days passing from the capture of Fav, we stationed
in a telecommunication building which consisted of some administrative
room and we put many blankets and carpets on the ground of this
building. Also in some cases we would hold the public prayers as well.

Martyr Davami was returning to the headquarter by a red motorcycle
model 125 from the frontiers. He was coming towards the
telecommunication building in order to attend the public prayer and to
take lunch. Commander Pasha, the authority of the Intelligence and
Operation Strip also decided to have a nap until noon and the moment
of calling for prayer because he was so tired. Therefore he chose a
corner of the room in order not to prevent the walking of others. Mr.
Tosi told me, what is under the blanket that he has crouched like
this? I said: "There is the gate for going to the basement of the
telecommunication building.”

He said: What do you mean?
I said: All the cables of the telecommunication center are under the
ground and this gate is a way to see those cables.

He said: Let me see, when I opened the gate, I observed that a thin
Iraqi guy had fallen down on the ground and as soon as he saw the
light, he opened his eyes and he was frightened.

I said: What was the Iraqi guy doing in the basement?

Mr. Pasha said: Poor him, he had sheltered in the basement in order
not to be killed.

We took out the Iraqi prisoner of war and we asked him to change his
clothes and we asked him to pray among us the same as an ordinary war
veteran. Eventually the comrades of martyr Davami arrived there as
well and they attended the public prayers queues. We had decided to
behave the Iraqi prisoner of a war in a way that this behavior to be a
model in the camp of prisoner of war and it be a good propaganda for
us as Iranians and Muslims.

When the prayer was ended, the table clothing was put on the ground
and all of us helped in order to put the foods on the tablecloth;
while we could still hear the sound of shooting and the air raids
which would take place in Dezful city. In fact the Iraqis were
struggling so much in order to recapture the Fav city, because this
city was strategically significant; because this city was both
connected to the port ‘Omol Ghasr’ and the Persian Gulf and in fact it
could be considered as a bottleneck to have access to open waters.

Anyways, the Iraqi prisoner of war sat near the tablecloth the same as
other Iranian war veterans in order to eat foods, but he was try to
pay attention and look at all the war veterans. Those who were unaware
of this issue, they thought that he is a newcomer (a new intelligence
force). Some of the war veterans would offer water and drinks to him
as well.

Martyr Davami did not notice this issue at all, because he was
thinking about the frontiers so deeply and he was hurrying up. As long
as he decided to move towards the Al-Bahar Road of Fav, one of the war
veterans asked Seyed Ali to take of the Basijis to the Marine Units of
the Army 25 of Karbala.

That Iraqi sat on the backside of the motorcycle behind Seyed Ali.

Since Seyed Ali had a wireless device in the way, they contacted him
and they asked him to be more careful. He was shouting and saying: "I
won’t be martyred until the time that I don’t martyr you.” The war
veterans said: "Seyed Ali who is on the backside of your motorcycle,
do you know him?”

When this Iraqi guy reached the marine unit of the Army 25 of Karbala,
tell them that he is an Iraqi prisoner of war. Since his clothes were
torn and dirty, we changed his uniform and we gave Basij uniform to
him.

When Seyed Ali noticed the issue and that what a big fun the war
veterans have made, he shouted on the wireless system and he told
them, what a strange job you do, you wanted to let this Iraqi guy to
kill me?

The war veterans told him: "The Iraqi thinks that you know the issue,
therefore you should not be so sensitive to the work and when you
arrived to the headquarters, hand him over and after that go to the
frontiers, good bye.”