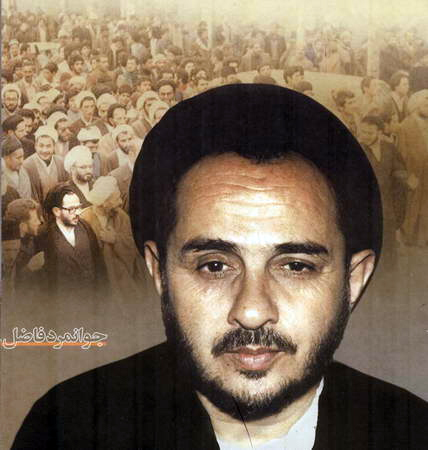 Navideshahed - After the martyrdom of martyr Hashemi Nejad, Imam Khomeini revealed the role of America and the Munafiqin Operation at the assassinating operation. Hojatul Islam Val MUslimin Sayyed Abdolkarim Hashemi Nejad, a famous warrior during the Islamic Revolution, martyred by the Munafiqin Organization in 1981.

After the martyrdom of martyr Sayyed Abdolkarim Hashemi Nejad, Imam Khomeini revealed the role of America and the Munafiqin Organization on the terror attack. "they try to distract 36 million Iranians by assassinating Iranian top characters from the path of Islam but they do not understand that the huge masses are like the roaring flood in the country who stood against the great powers" Imam Khomeini said. 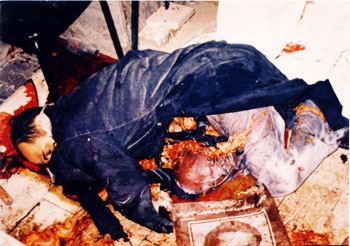 After a time Munafiqin Organization took the responsibility of the terror attack in Mashhad by its factors. It was published in the Mujahed magazine that: one of the most important and key forces of Imam Khomeini was killed in the following operation by our Mujahed "Hadi Alavian". Finally Sayyed Abdolkarim Hashemi Nejad martyred by the Munafiqin Organization in a suicidal operation.

Here is a short biography of martyr Hashemi Nejad:

Sayyed Abdolkarim was just 4 when he attended Islamic courses by Ayatollah Koohestani, a great Islamic scholar. Later he migrated to Qom where he studied Islam under Ayatollah Boroojerdi and Imam Khomeini for 14 years. Martyr Hashemi Nejad also got benefit from Sheikh Ali Kashani (Farid-ul-Islam). His rapid learning of Islamic knowledge and practical Islamic manners won his teachers' admiration.

Martyr Hashemi Nejad went to Mashhad in 1961 where he intensified his campaign against Shah. His sessions entitled "Free Debate" were soon closed by SAVAK (Shah's intelligence agency). The martyr then chose to keep on his campaign through authoring books on Islamic FAQs by the youth. The new trend, initiated by authoring "A Debate between the Dr and the Sage", proved much influential. The book angered SAVAK and was forbidden.

Following a rousing speech in Tehran the night before June 5, 1963, on which Imam Khomeini was arrested in Qom, Hashemi Nejad was arrested along with 40 other clergies. He came back to Mashhad after release and continued his campaign against the regime.

Along with Ayatollah Khamenei and Mr Va'ez Tabasi and quite secretly, Hashemi Nejad hired a room in which they issued statements encouraging Mashhad people to demonstrate against Shah. This led to his second arrest by SAVAK. However, he continued his Islamic meetings with the youth, for which he was summoned to the police and was given no-speech sentences several times. Due to such limitations, he traveled to make speech in other cities including Neyshabur, Shahr-e-Ray, Chalous, etc. still followed by SAVAK agents. In fact, a great portion of his dossier in SAVAK consists of documents on his campaign tavels.

Following a speech on "The Reasons behind Muslims' Backwardness" in Isfahan in 1971, Hashemi Nejad was followed by SAVAK and was finally arrested in Shiraz. He was forced back to Isfahan, where he was imprisoned and was given a no-speech-for-life sentence.

Following a third attack on Qom's Fayziyyah seminary school by the regime, though forbidden from making any speech, Martyr Hashemi Nejad delivered a speech in his own house in which he described the details of the attack on the students. This motivated the audience to take to the streets and chant slogans against the regime. He was arrested three days later and sentenced to a 2-year imprisonment.

During the 2 years in prison, Hashemi Nejad endured pains by the agents on the one hand and had several debates with Marxists and Mujahedin-e Khalq Organization (MKO) members on the other hand. Unable to reject his strong arguments, they offended him in many ways.

It was in 1979 that SAVAK attempted to assassinate Hashemi Nejad by launching explosives into his house when he was fortunately not present. He met Imam Khomeini in Tehran at his return from exile to know about his orders.

After the Islamic Revolution

Following the Islamic Revolution, Martyr Hashemi Nejad was elected as an expert in the Assembly of Experts on the Constitution representing Mazandaran. He played an important role in including articles on the Velayet-e-Faqih. His political wisdom led him to recognize the deviations of Banisadr, MKO and liberals much sooner than others.

As he considered the cultural revolution as the greatest revolution, Martyr Hashemi Nejad's campaign also included countering Anjoman Hojjatieh (a religious group not believing in the concept of revolution) and liberals. He finally became the secretary of the Islamic Republic Party in Mashhad, where he started countering the hypocrisy dominant on some state departments.

Finally in September 29, Hasehemi Nejad was attacked to martyrdom by an MKO member while leaving a classroom at the headquarters of the Islamic Republic Party in Mashhad.