The Exile of Imam Khomeini (RA) from Turkey to Iraq

"Great men, who have an open mind, never give up hope. They never think of themselves. They do not think of their freedom while they are in prison. They try to achieve their goals under any circumstances. 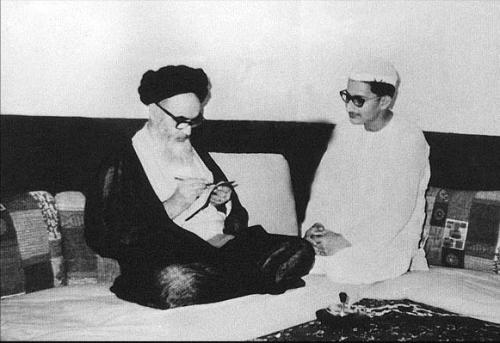 "Great men, who have an open mind, never give up hope. They never think of themselves. They do not think of their freedom while they are in prison. They try to achieve their goals under any circumstances.
Navideshahed - The exile in Turkey lasted 11 months. The regime was forced to change the destination of his exile so the Imam was taken to Iraq.  The Imam accompanied by his son Mustafa entered Iraq on the 5thof October 1965. For one week they visited the different cities of Iraq.  They then went to Najaf and the Imam stayed there for thirteen years. The Imam thought that Iraq was much better than Turkey.

The period in Najaf was the most defining moment of Imam Khomeini's life. He focused on two matters:
1-Scientific activities
2-Political measures

mam at his residence in Najaf

In relation to scientific activities the Imam paid attention to two main goals. The first was establishing classes and training clergymen. The Second was that he started writing books, which were useful for students. Thus he started to give 'Kharij' lectures in the Sheikh Ansari Mosque. Many students from different countries attended his lectures. He started teaching 'Islamic government' on February 1970 and it came to be his main area of teaching. Later a book was published, which stated the words of the Imam in these lessons, and was entitled the 'Islamic Government'.

In relation to Political measures, Imam Khomeini was restricted and rarely had contact with outside Iraq. However he was gradually able to form connections with anti-regime activists, who were scattered all over the world.

In the book, 'Islamic government', the following has been written:

"You have a duty to establish an Islamic Government. Know that you are able to do this and believe in yourself. The colonialists started their campaign 300-400 years ago and now they have reached this point. We will also start from zero." 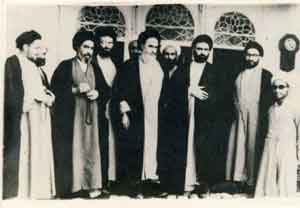 The Imam has also said the following during his stay in Najaf:

"Great men, who have an open mind, never give up hope. They never think of themselves. They do not think of their freedom while they are in prison. They try to achieve their goals under any circumstances. If they are unable to attain their goals they leave their work for others to take over. Achieving these goals may take 300 to 400 years.  Great revolutions are made in this way."

Imam among scholars at the Howza E'lmiyyah School of Najaf

Another matter which concerned the Imam in Najaf was the internal disagreements between the clergymen. The Imam tried to solve this problem and in a lecture in the Sheikh Ansari mosque he listed two reasons for such disagreements. The first was the enemies of Islam who played a secretive role in these differences and the second was the personal desires of inactive clergymen.

He never stopped advising the clergymen regarding the characteristics they should possess.  He wrote hundreds of letters and gave many lectures. His students recorded these lectures by writing them down and then distributing them among people. The period in Najaf was a defining moment for the Imam as he was able to teach freely and his messages reached the people of Iran via letters. In order to give hope to those who supported him the Imam said:

"Whatever happens do not give up. God is with you. Do not allow yourself to be weak. God willing these circumstances are temporary and they will soon pass".

"Do not despair of God's favours, victory is near."

"I assure you the regime will fall. Those who came before them were defeated by Islam, they too will be defeated…Be patient and stay strong…they are goners and you are here to stay."

"I confidently promise you respectable men that victory is near…..The fire which has lit up inside your hearts and chests will never extinguish… It is possible that you will witness its (the fires) great explosion."

mam at his residence in Najaf

Although the Imam was in exile he was still dangerous in the eyes of the regime and put them in a state of constant panic. He retold the events which took place from the year 1963 to1965 in such a way that the listener felt as if he was there at the time. For instance in a letter to Mr Hoveyda, who was the Prime Minister at the time, the Imam wrote: "Mr. Hoveyda it is necessary that I give you some advice…Your unlawful military government…… is a government which belongs to the middle ages, is a government of spears, torture and imprisonment, is a government of suffocation and restriction of freedom, is a government of tyranny and bullies……..Be afraid of God's anger, be afraid of the nation's anger…….Lo! Thy Lord is ever watchful."

In addition, he addressed the scholars and warned them to break their silence and said: "Silence now is the same as choosing and welcoming the death and fall of a great nation. It is necessary to break this silence before this opportunity passes by."

The eldest son of Imam Khomeini passed away on the 23rd of October 1977.  It is unknown why he died. He was a very knowledgeable man and could have benefited the Muslim world a great deal if he had stayed alive. The Imam first announced the death of his son in a short statement. Then on the 1st of November he explained how he felt about this tragedy and described the death of his son as the following:

"These kinds of affairs are of no real importance; these things happen. Everyone experiences this kind of thing at some time. God, the Blessed and Exalted, shows His mercy in ways both manifest and hidden. He has a hidden beneficence of which we have no knowledge; a beneficence about which we are uninformed…. That is why we grieve and make a fuss when these kinds of matters arise. We show no tolerance at such times."

Although the Imam had lost his son and despite the fact that he was away from home, he still kept up to date with current affairs and was as active as ever. He was always looking for suitable opportunities to express his views. While addressing Iranians living in Iraq and clergymen, the Imam stated:  "Today we have been given a chance. This is an opportunity. Value it gentlemen.  Write and object….don't let this opportunity pass." The Imam practiced what he preached and he was the first to carry out his own advice.

When replying to the letters of condolences sent by various religious authorities and clergy men, the Imam not only thanked them but reminded them of their religious and political duties and the oppression of the Iranian regime.

In the following statement the Imam refers to the ceremonies being held to honour and mourn the loss of his son and says: "We are faced with great hardships and heartbreaking tragedies thus we should not mention personal tragedies. The great protests (mourning ceremonies) during this period is a strong reply to the years of useless words said by this unworthy figure (Shah), who destroyed all the respect, honour, freedom and economy of this great honorable nation. He did all this to satisfy his and his plundering family's personal desires and wants."

The Iranian government tried its best to make the Imam look bad and tarnish his reputation so that the people would stop supporting him. Thus on the 7 th of January 1978, the Etela'aat (a newspaper) published an article with the title "Iran and the black and white colonization". This article referred to the demonstrations that took place on the 5th of June 1963 as an 'inauspicious disturbance' and talked of its leader as "A quarrelsome, faithless man who is dependent and devoted to the colonizers".

The people and clergymen of Qom were the first to object to this article and they were silenced with bullets.  Once more the shedding of blood caused a deep rift between the government and the people. The regime had tried to ruin Khomeini but saw that the people were ready to lay their lives in order to protect his name and honour. Thus it was as if the 5th of June took place once again. This time the bullets they shot at demonstrators backfired.

Imam Khomeini blamed the Shah for the massacre of the demonstrators. He released a statement giving his condolences for the tragedy that befell Qom. In one of his speeches he assured the people that: "God willing this root (regime) will soon be cut off."

On the 22nd of January 1978 Imam Khomeini sent another message for the people. In this message he said: "Salaams and greetings to the wise and educated Iranian nation, who defend Islam through great oppression and massacres... I give the honourable Iranian nation the good news that the oppressive regime of the Shah is taking its last breaths…."

On the 18th of February, forty days after the massacre of the people of Qom, many cities held gatherings in order to commemorate the martyrs of this incident. During the gathering held in Tabriz military forces attacked the people and shot at them. Thus forty days after the shooting of the people of Tabriz different cities in Iran held gathering to commemorate these martyrs. Due to the fact that the regime kept attacking the people at these gatherings, commemoratory ceremonies kept being held until they attracted media attention.

On the 24th of April 1978 a reporter from the famous Le' Monde newspaper came to Iran to get the latest news on the political changes and shifts in the greatest country in the Middle East. This reporter wrote the following:  "Within one of the small alleys of Najaf, where the houses were built into each other in order to act like a shelter against the burning heat of the sun, one finds the humble residence of Ayatollah Khomeini. This house resembles the houses of the poorest people of Najaf. In this humble residence there are no signs of the power of opposition leaders who live in exile. If Ayatollah Khomeini has the power to ignite a rise in Iran then this power is certainly due to his dominance and authority over the views of the Iranian people. Instead of decreasing, this authority has increased tenfold since he has been exiled…" The Imam expressed his views regarding matters to do with the rise of the people, foreign powers and other political groups during his interview with this French reporter.