Raeis Ali Delvari in the words of an injured British commander Navideshahed – open your eyes. The sea is sad … look the waves are tired. The wind is blowing slowly. A man is screaming "is there any person who helps me?" The sea is flooded. The sea sheds its holy anger out. Oh my lord … what I see? I am stunned by his stature, the one who comes from far away. I see an aura of faith around his body and killed the enemies without any fear. I knew it well that he is the loneliest man of the south, exactly like his master Imam Ali (AS) and Imam Hussein (AS). He sees the enemies and attacked toward them. His companies lost their life in his path.

Raeis Ali Delvari had spent hard times during his life. All the warriors never left him alone. He never paid attention to fear. As I saw him, I remembered Imam Ali (AS) and Imam Hussein (AS) who wanted to remain in the history. The enemy was really scared. They could not resist against him. They tried to run away. He stood firmly at the center of the battle field. 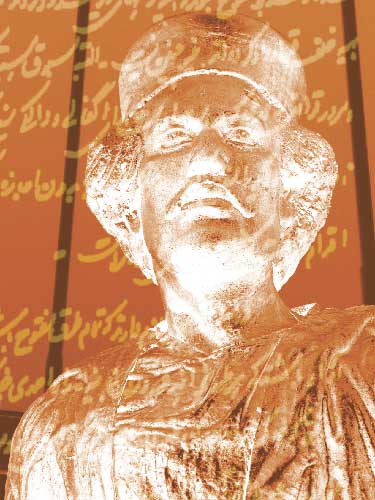 He started to explain and those officers started to write. These are the very important subjects. Write them carefully and deliver it Gen. Joseph.

… General! I am going to die while I am writing the letter for you … I ask myself … I lost my life in what a path? Is any strong nation attacked to our country (England)? Or they wanted to relieve Christianity from the world? Nobody tried to attack to my country.

I had a very close relationship with the Iranians during the time all over the Persian Gulf … they are too noble, hospitable and kind. You can find it that Raeis Ali Delvari let me to write a letter for you under the present circumstances, he himself encouraged me to write for you … does it mean the nobility and civilization? Let's be frag … if you were in the same circumstances, you would never let their captives to write for their commanders. We occupied Bushehr and the post office was under our control … we read the people private letter and wrote the name of the "Nationalists" in the "black list".

Raeis Ali Delvari never censored my letter; there are many differences among us. He is too smart and clever. We are Munafiq and insincere. We oppress the oppressed people and we do not attention to their wail … we finished our study at the "Oxford" university in London and Raeis Ali Delvari studied at the hot desert in Asia. Finally the injured commander asked two officers to deliver the letter to the General.