The 4th Anniversary Martyrdom of the martyr Hamedeni will be held 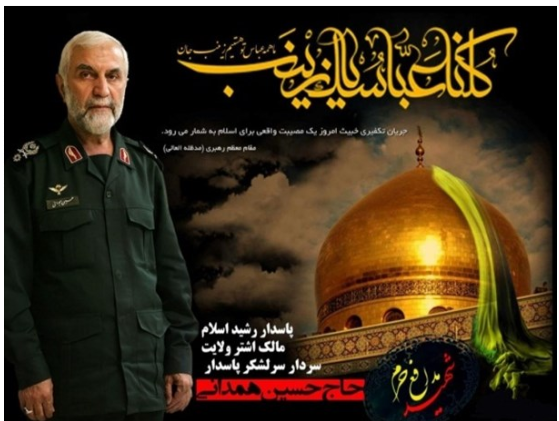 Hamadani was born in Abadan, Iran. His parents were originally from Hamadan.
Hamadani first rose to prominence during the 1979 Kurdish rebellion in Iran and the Iran–Iraq War, where he helped suppress the Communist rebellion in Iranian Kurdistan. Mohammad Ali Jafari appointed him as Deputy Commander of the IRGC in 2005, and together they planned how to deal with any attempted "velvet revolution" in Iran. Hamadani subsequently helped to suppress the 2009 election protests in Iran. He had been head of the IRGC's Rassoulollah Corps in charge of Greater Tehran from November 2009 until January 2014, and had been subject to international sanctions since 14 April 2011. Finally he was martyred by the Daesh Terrorist Group in Syria.
Message End/
Tags:
navideshahed ، issar and martyrdom ، shrine defender martyr ، syria ، Daesh ، Haj hussain hamedani ، Martyr hamedani ، Iranian beheaded martyr
Subscribe to newsletter