The memories of martyr "Abbas Doran"

Navideshahed – a historical – cultural monthly magazine published for the martyr Abbas Doran by the effort of Shahed magazines groups. His biography describes the Iranian courage and resistance.

1) It was really stressful for us to know whether we will be alive or not? But he was Abbas Doran who was too calm. We never saw any fear in his eyes. He was too brave and clever 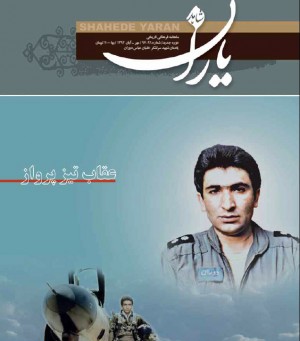 2) Martyr Abbas Doran was the first person that Shiraz authorities named a street to his name before his martyrdom. "I usually tried not to speak about the hardness of my job with my wife. I prefer to be fun at the home. When you named a street to my name I find happiness on my wife's eyes.

3) The authorities of the Islamic Republic of Iran Air Force decided to move him back since his multiple flights, but he did not accept… I love to fly… I want to help my country. I passed all my flight training period with the money of our people so I cannot left them alone… who should defend from our country? Abbas Doran said.

4) He had experienced 120 flights during two years. This is an amazing statistic among the world wars history. At the day of His last mission we spoke with each other and he started his operation. After his martyrdom, I heard from one of our friends that Abbas had told him: it would be my last mission. If I did not come back you should inform my family.