Navideshahed – 7th of Tir (lunar date) is the Sardasht bombardment anniversary. A ceremony held in Enghelab Hotel with the title of "The Burned Breath". There were many guests who had a different story. One of entered with an oxygen capsule while the other one entered with cane. Most of them used mask which was the sign of "chemical veteran".

Chemical/ how do you feel as you hear your friend's martyrdom?

I am a veteran during the Valfajr 8 and Karbala 5 operation. I moved to Karaj since my lung disease two years ago. I hospitalized for 4 months each year. A veteran will be martyr since his physical issue every week, the upset veteran said. Whenever Mr. Barkham heard about the chemical weapons he remembered his chemical issues and Saddam's crimes. He absolutely believes that the chemical bombardment is the greatest crime in the history. 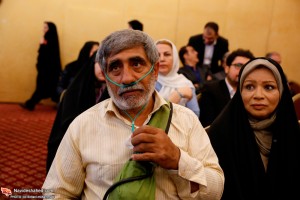 . In the Sumar region Ezatollah Bakhshizadeh got injured on the Karbala 5 operation. I was fixing the cars which were shot by bullet war in the forefront. It was near the noon that the Bathi regime used chemical weapons in the region. Smoke spread everywhere it smelled like garlic. At first we did not know that they had used chemical weapon and we did not used our mask, Ezatollah Bakhshizadeh a 70% chemical veteran said.