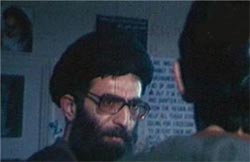 Navideshahed – the Nojeh Coup is one of the most important events during the Islamic Revolution Victory. It was as clear as a day that there will be a dangerous trick from the first days of the revolution. The "Nojeh Coup" was the same dangerous trick which would be played by the old soldiers of the Pahlavi regime that finally lead to fail and created another scandal for the west and the America.

Ayatollah Khamenei and Ayatollah Hashemi Rafsanjani visited Imam Khomeini (RA) to inform him from the Coup. We asked imam Khomeini to leave Jamaran, but Imam Khomeini did not accept and told us: do not be worry about me… nothing will happen for me tonight.

Finally the Nojeh Coup lead to fail and created another scandal for the west and the America by the on time reaction of Imam Khomeini and the other authorities of the country.