Navideshahed – Martyr Alireza Akbari who was the member of the shrine defenders, martyred in Syria in 2015. His pure body finally found after 4 years in 2019. Here is an interview with her mother that you can read:

Alireza Akbari joined the Islamic Resistance forefront at the age of 19. Finally He martyred after one year. I called his name Reza since I love Imam Reza (AS) very much his mother said. 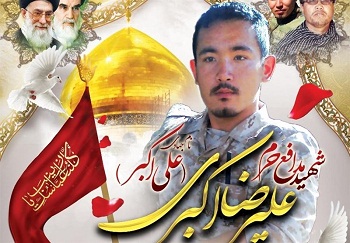 We had 6 children in our family, 4 boys and 2 daughters who grew up in a religious family. Alireza studied until the third grade of elementary school in the Iranian school. Finally we found a school which was specific for Afghan people. He left school because of his father sickness and started to work, His mother added.

He was too clever and patient. He worked hard to earn money for us. His father was the first shrine defender martyr of Akbari family after that Alireza joined the Islamic Resistance Forefront. At first my husband participated at the forefront and then Alireza Joined, she said. One day he came and said: " I want to confess that I went to Syria 2 times but now I want you let me go to Syria this time.

He was completely changed. One day I found him who was speaking with his sister calmly. He was speaking about Jihad and forefront. Finally he left us alone and went to Syria to defend from Hazrat Zainab (SA) holy shrine. One day one of his friends informed us that he was martyred and his pure body did not find until some days ago called us and said his pure body find after 4 years.