The Memorial Ceremony of Sayyed Ali Akbar Abu Torabi will be held in the 20th of Khordad in Hozeh Honari in Tehran. 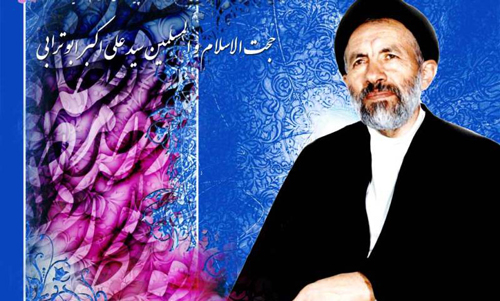 Navideshahed – the memorial ceremony of "Haj Sayyed Ali Akbar Abu Torabi" will be held in the 20th of Khordad in the Hozeh Honari Hall with the presence of Governmental and the military authorities.

Hojatoleslam Seyyed Ali Akbar Abu Torabi Fard was born in 1939 in Qom. In childhood he saw all Reza khan’s violence against religion and seminaries and clerics of Islam. He also saw women of family stay at home in Kashfe hijab time and found his ancestors in fight path against Pahlavi’s irreligion plans.

He was the champion in swimming event Amjadiyeh in Tehran and was the top player in football and volleyball in high school. In 1957 after finishing high school his uncle insisted that he would go to Germany and continue his education there. He thought continued studying in seminaries would leave him poor and needy. But after a little hesitation in Qom, in 1958 he went to Mashhad to learning regional science hence he could to escape his uncle's insistence. However he made a covenant with himself never get financial assistance, even from his father. In Mashhad he was living in paltry room in Navvab School and was engaged in teaching and learning.

With beginning of Imam Khomeini’s movement, he found Qom as the center of struggle so he returned there in 1963. He resided in the Hojjatie School to be engaged in Khomeini's companions activities. in 1965 subsequent to Imam Khomeini’s exile to Najaf Hojatoleslam Abu Torabi rushed to his presence to attend his Kharij Fiqh and Usul courses.

With his father Haj Seyyed Abbas Abu Torabi , he was killed in a car crash on June 2, 2000, when they were on their way to Mashhad for Imam Reza pilgrimage. Their bodies were buried in the Sahn Azadi (freedom courtyard) of the Imam Reza shrine on the anniversary of Imam Reza's martyrdom.