Navideshahed – the book of "Sun Smile" which was written by Ali Falah Zadeh and Leila Bagheri Sheikh Ahmadloo published by Hoda Publication. The book explained the memory of the shrine defender martyr " Majid Asgari".

In the following book you can find the titles such as: "Before his martyrdom, he fulfilled his promise" , "First Mashhad then Syria", " I can read Quran", "martyrdom of Imam Hasan al-Asgari and martyr Asgari", "computer teacher", "the corpse remained in the ground", " he went and came back for 3 times", " I don't come here for money", " I come to visit Imam Hussain (AS)" and " Mr. Majid and the remained ring". 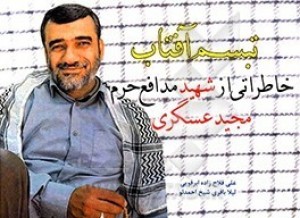 "Majid Asgari" the shrine defender martyr, was a teacher with 23 years of experience. He taught computer and mathematics in Qom. He left his work and went to Syria for 3 months. At the 7th day of his presence, he martyred in Door al Zaitoon region at the martyrdom of Imam Hasan al Asgari (AS).

The book was published in 96 pages with the price of 10,000 Tomans by Hoda publication.