In the memory of Ayatollah "Haeri Shirazi"

At the introduction of the magazine you can find a title which is written by Sayyed Mohammad Ali Shahidi Mahalati, the Director of Foundation of Martyrs and Veterans Affairs, "Politician man in Howzah and Literature": 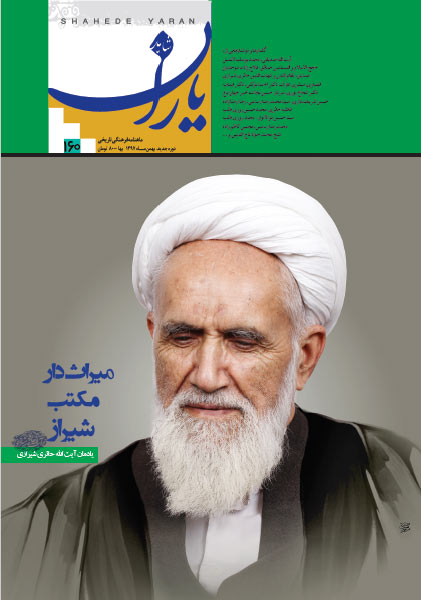 He chose Howzah voluntarily. He studied the primary levels at the "Mansooriyeh school","Sayyed Ala al-Din Hussain School" and Agha Babakhan school. During the time he was the student of Ayatollah Baha al-Din Mahalati and Ayatollah Sheikh Mohammad Ali Movahed. Ayatollah Haeri Shirazi moved to Qom to continue his education. Ayatollah Boroujerdi and Ayatollah Mohaghegh were his teachers. He was too clever and never wasted his time and read the literal books, Sadi and Hafiz poems when he was free.

In the latest issue of Shahed Yaran monthly magazine you can find writtings with the title of "he was rare man of the days", "scientist and philosopher"," he spent his youth in prison or exile","bitter memories of Savak torture","he was too modest" and "he had good relationship with all the people even his opponents".

Hojatol Islam Mohammad Hasan Kaviani Rad is the responsible director of the 160th issue of Shahed Yaran monthly magazine and Rahim Narimani is the Editor in Chief of the issue.

To buy the magazine visit mag.navideshahed.com or call us on 88823584.