All the commanders martyred in the picture

Navideshahed - Mohsen Vezvaei became the commander of Sayyed al Shohada 10 battalion by the order of Haj Davood Karimi in 1982. Due to the following picture all the commanders who were in the picture were martyred.

Here is some short biography of the martyrs that you see in the picture: 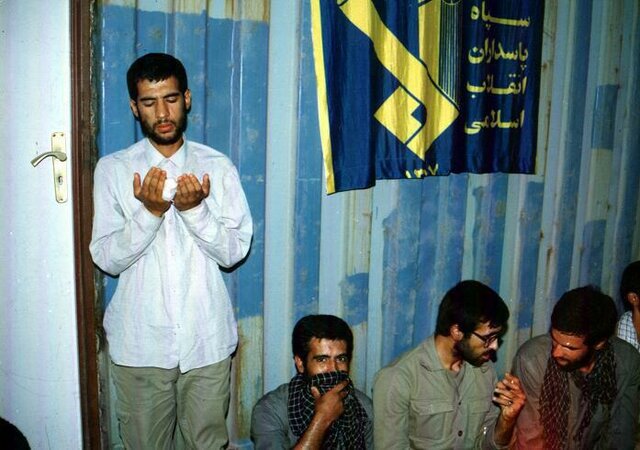 After the beginning of the imposed war, martyr Davood Heidari went to the forefront as a photographer. He took the pictures of the sacred defense moments of Khorramshahr.

One day some of the forces martyred for an explosion. After the explosion Davood felt on the ground while all the forces thought that he was martyred. They carried his body to Morgue in Abadan. After some hours Davood Heidari moved his body and breath. Due to the power outage, he must remained beside martyrs until morning. At the morning when the rescuers opened the door of Morgue they found him alive and moved him to the hospital. Finally he was martyred at the 8 Karbala operation.

Sayyed Hussain Mir Razi was born in 1958 in Karaj. He was martyred in 1986 in Basrah when a bullet war hit his back. At the beginning of the imposed war he went to the forefront. He had different responsibilities such as; commander of Sayyed al Shohada battalion, commander of plane and operation, deputy commander of Habib ibn Mazaher battalion.

Martyr Jafar Mohammadi was born in 1958. He had an important role in the Islamic battles. As the war started he had joined the Islamic Revolution Guard Corps. He had taken different responsibilities. Finally he was martyred at the 8 Valfajr operation and joined his friends.

Sayyed Mohammad Zeinal Husseini did the hardest and dangerous affairs himself. During his presence in the sacred defense got injured 3 times and suffered from chemical injury. Finally he was martyred at the 4 Nasr Operation by a bullet war which hit his chest. His pure body was buried in Behesht e Zahra(SA) in Tehran.