Sometimes back on the saddle and sometimes saddle on the back!

During the military operation ‘Valfajr 8’ it was demanded that the forces to move forward without wasting time. It was almost 11:00 o’clock at night. After crossing the road when we arrived to the reedy area 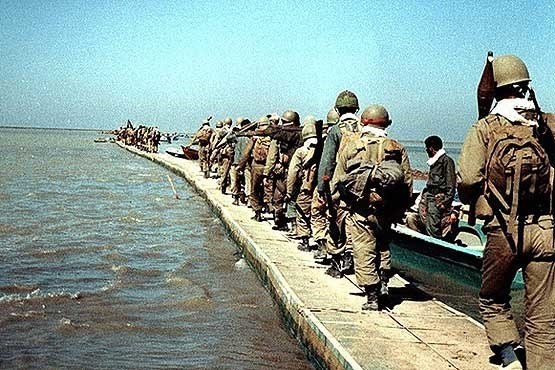 Navideshahed - During the military operation ‘Valfajr 8’ it was demanded that the forces to move forward without wasting time. It was almost 11:00 o’clock at night. After crossing the road when we arrived to the reedy area, one of the comrades shouted that there is no news about the military group. After paying attention to this issue, they notice that except those three persons no one else is around them.

That area was full of the dead bodies of Iraqi soldiers. The comrades thought that there is no one in there and that the area is controlled by the Iranian forces. At that time the sound of opening fire by the enemy made them so surprised. About 10 to 12 Iraqi forces surrounded them. The Iranian forces have to put down their guns and one of them slowly says, don’t give up at all and that it is better that they show no reaction in this field. This talks made a trouble for them and the official who was apparently the commander of the Iraqi group thinks that the Iranian soldier who talked like that might be a senior authority that the other soldiers listen to his words. So he comes closer and he hit the stock of rifle gun to the chest of the soldier and makes him to fall down on the ground and they beat the other two soldiers with the stock of their rifle guns so badly.

Eventually they tie their feet and hands and they take them to their rifle pit to get more information from them. When they observe these three soldiers, they think that they are the intelligence forces of Iran. Even though the Iranian soldiers beg that they are the ordinary soldiers, but they don’t believe it. The Iraqi forces liked to know the situation of Iranian forces and one of the soldiers cleverly said: "All the Iranian forces are retreating.”

When the Iraqi official seems to believe this issue, he laughs and says something in Arabic. The Iraqi solider who can speak Persian a bit says: "Yes, we made you to escape towards backward.”

Suddenly one of the soldiers angrily says: "It was a beautiful sentence. But you are more coward than stopping us like this…”

When the Iraqi soldier observes the speech impediment of the translator soldier, he gets so angry and he starts beating the three soldiers in a way that their faces and heads become full of blood. There is no news about them after three hours. Suddenly the whole are becomes so noisy and the Iranian forces attack the war zone. The sound of a foot absorbs the attention of the three Iranian soldiers.

Someone was getting closer to the rifle pit. Some other was coming with them as well. They are talking in Persian.

Someone from the backside of the rifle pit shouts, anyone who is inside the rifle pit must come out. There is a big noise outside of the rifle pit and the three soldiers have to make the outside soldiers aware of this issue. That is why they should so firmly and strongly and they say that they are the fighters of Sarallah Army. Eventually the Iranian forces hear their voices and they enter the rifle pit so cautiously. The Iranian forces laugh when they see them in that situation and they say that you started the military operation a bit sooner! When they open their hands and feet and get out of the rifle pit, they see that the Iraqi official and his soldiers have been captured by Iranians. The Iraqi official look at them as he has been frightened. Maybe he imagines that now it is their turn that they beat them. They take the three soldiers to hospital because their faces and heads had been injured. There are some other injured patients in the ambulance as well. Still they had not passed a long distance, suddenly two rockets hit near their ambulance. Despite of the heavy fire of the enemy, the ambulance driver stops and with his Esfahani accent says: "Those injured patients who are not able to move, they can get on the ambulance!” His voice at that sensitive situation made the injured patients to laugh.

Eventually the Iranian forces defeated the Iraqi forces during that military operation.