Yaghoob Moradi had accomplished 10 years of his captivity under the most difficult situations. Someday he faced with a prisoner of war in the yard of camp who was not mentally fine. 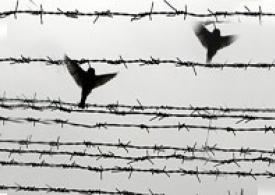 Navideshahed - Yaghoob Moradi had accomplished 10 years of his captivity under the most difficult situations. Someday he faced with a prisoner of war in the yard of camp who was not mentally fine. That prisoner of war who had spent his time outside of the camping several months before says…

Yaghoob Moradi had accomplished 10 years of his captivity under the most difficult situations. Someday he faced with a prisoner of war in the yard of camp who was not mentally fine. That prisoner of war who had spent his time outside of the camping several months before says: "Two! He says: What was the name of your older son and what was his job? Yaghoob responds: "His name was Amir and he was studying in the second year of guidance school. The questions of that prisoner of war suddenly made the mind of Yaghoob worried.”

The prisoner of war say: "Is this possible that he is a Basiji or a member of Islamic Revolutionary Guards Corps?”

Now we read the story as a narration expressed by Yaghoob as follows:

I had received a letter from Amir before that and he had written the letter in codes. I’m working with Mr. Rezayee. Suddenly I got so worried about this issue that I was responding his questions so easily. These questions could be something strange from that person who had a long background of disease; it seems that the questions had been planned. His final question was this question: "Don’t you think that Amir has been martyred?”

- I don’t know; but I’m waiting to hear his martyrdom news. It is impossible that the war has lasted this long time and I think that he has not come to the battlefields at all! Of course until now I have received several letters and in one of the letters it was written that a quiver had hit the head of Amir and that he is hospitalized; But I’m waiting for a certain news.

After going, I asked this question: "Have you heard anything from anyone? The God has granted the power of hearing the martyrdom news of my both children; so you can say anything that you want.”

- No, I have not heard anything. I just wanted to ask this question. He said this and then he left.

- In the next year, ten days after occupation of Kuwait by the Iraq, they brought six prisoners of the Movasel camp to Yaghoob. One day morning when Yaghoob was walking with one of the new prisoners whose name was Engineer Hashemi, suddenly he said: "How did you hear the martyrdom news of Amir?” His knees got weak and he understands that his son has been martyred.

The news was dispersed in the camp so quickly. The friends came to him one after another and they expressed their congratulation and condolence to him and Yaghoob would welcome their speech in that country. During night one of his friends come to him as he was crying in tears and he says: "We knew this news since one year ago and we knew that your son Amir has been martyred; but we thought it is better not to convey this news to you.”

On the next day, the officials of Red Crescent came to the camp.

"In the name of God

Dear Yaghoob Moradi, hello, I hope that you are fine and happy. Since I myself was a prisoner of war and I know that the prisoners of war want to get aware of their family, against the families who do not express the realities, according to the knowledge that I have from you, I would like to explicitly say that your son Amir was martyred in 1967 during the military operation ‘Karbala 5’ which took place in Shalamcheh. Also your son was a member of Islamic Revolutionary Guards Corps and a member of the Intelligence of the Army 27 of Mohammad Rasul Allah.”

But the second letter was the engagement news of his daughter Zahra. The marriage had taken place after three years passing from the martyrdom. But Yaghoob had received both letters on the same day. It was something strange for his captivity.