A Martyr Who was praying!

Since he would not pray, I thought that he was not a Muslim, but no one had noticed this issue; because a few days before that he had seen the fighters in Ashura prayer and he had been really surprised about this matter. 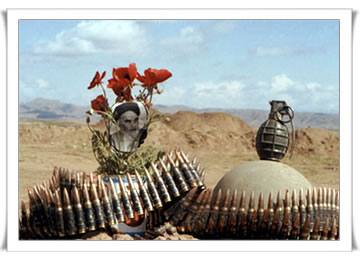 Navideshahed - Since he would not pray, I thought that he was not a Muslim, but no one had noticed this issue; because a few days before that he had seen the fighters in Ashura prayer and he had been really surprised about this matter.

When Hamzeh Khalili Vavseres saw him, he went close to him and he greeted him. His face’s decency prevented more curiosity of Hamzeh and he was not able to ask why he does not pray; that is why instead of this question, he asked how many months he has been in the battlefields and where he is from? He introduced him as Esfanidyar and that he is from Yazd province. Hamzeh got curious and asked the meaning of his name and he responded: "Esfandiyr means a sacred reward. When Hamzeh got relaxed about asking questions, then he frankly asked why he does not pray God. And he asked: what was the reason that he did not pray at all?”

Esfandiyr smiled and he said that he was right, but his heart was always with the war veterans and he pointed out to the Islamic Narration ‘I’m proud of my country and I’m sure that love is the connection point between me and war veterans’

They had become so busy with the discussion, suddenly one of the rescue team members called Hamzeh and he asked him to go to the health center in order to provide some medicines. Hamzeh got up and said good bye to Esfandiyar and while Esfandiyar war cheerfully pressing the hands of Hamzeh he told him: "Good bye”.

As Hamzeh was thinking about the words of Esfandiyar, he went to the health center. He did his work and returned and when he arrived to the headquarters, he observed that the battalion was moving towards Mehran war zone in order to hand over Ghalavizan.

Hamzeh went to the authority of preparation and he asked where the place of assistance was and he noticed that they are going to be dispatched to Tehran. He got so surprised and he asked the authority to search the name of Esfandiyar. The authority responded that he is from Yazd province, but since he was a student of Tehran University, he was dispatched from there.

The mind of Hamzeh was involved with this issue for a while and he did not know why a Basiji student would not pray?

After a few times, at 5:00 in the morning they contacted with by the wireless system and they announced that thy need an ambulance; Hamzeh moved towards the frontiers along with Mehrdad and in a part of the road, they had to get out of the car due to the roughness and barriers of the road. They moved with a stretcher and first aid box. The rocket had exactly hit the rifle pit and three war veterans had been martyred. When the authority of supplies tries to identify them, Hameh noticed that the name of Esfandiyar was among them.

It was Esfandiyar Keinezhad, the university student of third medical class, from Yazd, religion: Zoroastrian…

At that moment Hamzeh remembered the final words that he had said that he had said: "I’m proud of my country and I’m sure that love is the connection point between me and war veterans.”

Hamzeh sat down near the head of the martyr and as he was praying for him by the tradition of Muslims and he said: "You are Sacred Reward! You were martyred in the sacred way, good bye.”