The Memorable Wrath of the Night!

Mahmoud entered the tent ad he was laughing and he awakened Abbas and he informed him that his relatives are there. Abbas rubbed his eyes and he asked Mahmoud not to bother him and he said: Where is Lorestan and Where is here? 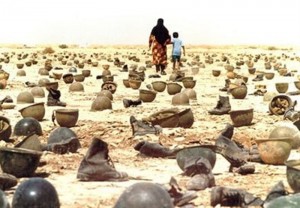 Navideshahed - Mahmoud entered the tent ad he was laughing and he awakened Abbas and he informed him that his relatives are there. Abbas rubbed his eyes and he asked Mahmoud not to bother him and he said: Where is Lorestan and Where is here? Mahoud said: "If you come there, you will see that they have brought a gift for you as well.”

All of them got out of the tent and they saw three men who had loose pants, felt hat and one of them had a white lamb in his hand as well.

Abbas hit himself and said: "Oh my God, everything was ruined for me! When the old men saw Abbas in that situation, they started expressing goods words. Mahmoud wanted to prepared tea and Abbas introduced the guests as well. They were father, grandfather and the uncle of his father future father in law.

The old men were talking with the sweet Lori accent and they were smoking with a pipe and it caused that some of the war veterans who were inside the tent to cough. The uncle gave the lamb to Abbas, and he asked Abbas to behead the lamb and use its meat for all the fighters. The war veterans entertained the guests with apple and cherry compotes.

Abbas’s father in law blew a thick smoke and he said: "Your situation is so good, so why they announce that the war veterans of frontiers should be helped and the war veterans need foods, clothes and blankets!”

Abbas felt shy and his face turned red and he said: "No, Mr. Karbalayee, you are our guests! That is why the war veterans did their best in order to entertain you. But this time the father and grandfather told them that the work of war veterans is eating and sleeping here. The war veterans started laughing so much when they heard the words of those three old men and they pointed out to the sky clouds and they pretend and laugh with them. The guests stayed there at that night and the war veterans prepared a place for them to sleep.

At that night the military wrath of night occurred. By the first shooting, the father, grandfather and uncle were awakened and they started shouting and they expressed the names of Imam Hussein (AS) as they were creeping among the other war veterans. When they had seen that situation, they had noticed the critical situation of the war zones as well. In the morning when the war veterans return from the morning ceremony, they saw Abbas as he had a lamb in his hand and his guests had left.