The address of Grave!

Abdol Motaleb Akbari was doing activities in the battlefields along with his cousin. Abdol Motaleb was deaf and he would work as a mechanic. 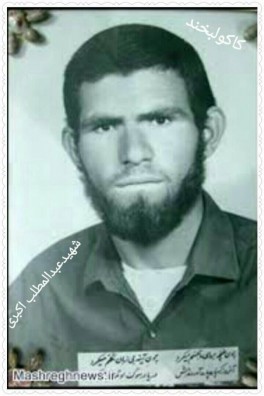 Navideshahed - Abdol Motaleb Akbari was doing activities in the battlefields along with his cousin. Abdol Motaleb was deaf and he would work as a mechanic. When Gholam Reza was martyred, Abdol Motaleb went near his grave and he attempted to say something although he could not, but the war veterans did not notice what he wanted to say.

In order to make the other comrades understand what he meant, he drew a grave near Gholam Reza’s grave and he wrote his own name on that; after that he looked at the fighters and he laughed.

The war veterans also laughed when then saw this action of him and they did not consider it as a serious action.

On the next day, Abdol Motaleb was dispatched to the battlefields and he was martyred. They brought his body after ten days and they bury his body exactly near the grave of his cousin.

Abdol Motaleb had written in his testament: "I talk with Imam Everyday. Imam says that you will be martyred and your grave is here.”