The first Ramadan Month in the Captivity 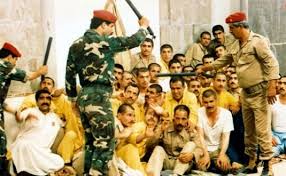 The problem was that in the evening when the Iraqis would count the number of prisoners of war, there was no one to open the tap in order to bring water to the sanatorium of prisoners. The prisoners of war staying in the sanatoriums 10, 11 and 12 would be counted after the other sanatoriums and they had more freedom; that is why for the purpose of doing this work, someone was chosen from them. Eventually one of the prisoners of war volunteered and he risked and he passed among the herbs in order to connect the pipe to the tap. By this method, the prisoners of war had drinking water inside the sanatorium every night. In order to preserve the water, they needed to guard from the window by a mirror, so if an Iraqi soldier would pass from there, the Iranian guard would shout: "Pull it, Pull it, Pull it”, so the first soldier who was so close to the pipe, he would pull the pipe and they would hide the pipe in the sanatorium and to stay without water until morning; although this event would rarely happen.

At one night, the soldier passed among the herbs and the guard noticed him so late. When he arrived there, they took the pipe into the sanatorium, but the sign of water had remained on the ground. The soldier shouted and he informed the Guard Officer and other soldiers. The door was opened and they started investigating the sanatorium. They searched so much, but they found nothing after two hours investigation. Eventually the Guard Officer shouted and told the soldier: "You are crazy, how can they hide 10 meters pipe?” the soldier swore that he had seen the pipe with his own eyes which has been taken into the sanatorium.

So where is the pipe now? There was a thin soldier who would wrap the pipe around his waist in a fitted form and it was not clear at all when he would wear the cloths on that.