How much is the value of one day captivity?

A prisoner of war and injured patient who had returned to country after many years had faced with the high pressure of living costs. A few times ago when this pressure reached its peak, he went to a writer and he asked him to write a letter for him 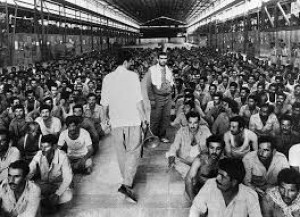 Navideshahed - A prisoner of war and injured patient who had returned to country after many years had faced with the high pressure of living costs. A few times ago when this pressure reached its peak, he went to a writer and he asked him to write a letter for him. He told the writer: My dear brother, I want you to write a letter on behalf of me to the authorities of country. Write them that Shabani wants to have dealing with you! Tell them that someday when the Iraqis got disappointed from using different types of tortures and persecutions against me and when they were not able to satisfy me to say insulting things against Imam Khomeini, they told me that if only I express one bad word against the authorities of country, they will free me!

But I did not express that one word; because expressing that word would break the greatness of that great founder of the Islamic Republic of Iran in that foreign country and this issue would disappoint my friends and I never liked to humble them even once in front of our enemy.

But you respectful authority, since I did not say this work I was whipped for a whole day while my hands and feet had been tied to a bar. My crime is loving my country.

This prisoner of war continued: "I would like to exchange the heavenly reward of that day that I was whipped with …Tomans of loan; if you are a customer for it, I’m ready to have dealing with you!

When the war veteran left, the writer could not write even one sentence. On the next day in the early morning the writer knocked his door so firmly and visited him. Therefore the writer observed the prisoner of war as he was worried and before greeting he said: You have not written that?!

The writer said: No! But let me to write it just right now!

Devotee Prisoner of War- Manouchehr Shabani- the accompanier and comrade of Hojjat Ol Eslam Abutorabi who was martyred in 2003 due to the injury resulted from chemical weapons.