Hezbollah Secretary General has said that it was the Resistant forces who put an end to ISIL(or Daesh), adding that the US army only delayed ISIL elimination. Nasrallah also pointed out that Iran has always been ready to help Lebanon 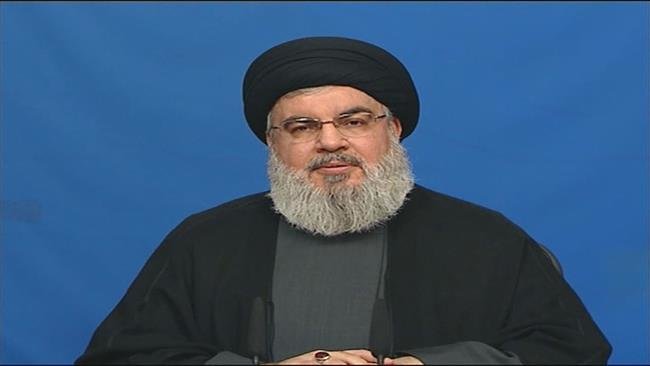 Navideshahed:
At the start of his speech today, Hassan Nasrallah said millions of Iranians took to streets during the celeberation of 40th anniversary of the Islamic Revolution in order to send a strong message to the US and Israeli regime that the Iranian people still support their government despite foreign pressures.

The Hezbollah chief further referred to the Yemeni crisis, describing the war as the US and Israel war being waged by Saudis and the UAE.

He further added that all Arab and Muslim people in the region reject normalization of ties with the Israeli regime and the plot is condemned and rejected throughout the region.

About the end of ISIL, the Hezbollah chief said that the ISIL has been eliminated as there is no preseince of ISIL in Iraq, Syria and Lebanon anymore. He dismissed the American claims that they fought against ISIL, adding they created the terrorist group. "The American administration during the time of Obama and Trump created ISIL in Iraq and expanded it to Syria," Nasrallah said.

He further said that the US officials including Clinton and Trump confessed to the US creation of ISIL.

The Hezbollah chief further noted that the Americans caused the delay in deciding in the battle against the ISIL in Syria's Bu Kamal. He added that US hypocrites used ISIL to return to Iraq and to occupy Syria.

Nasrallah added that Trump prevented the liberation of ISIL territories by the Syrian and Iraqi poplular forces, especially in Syria's Bu Kamal, stressing that the Americans cannot claim they put an end to ISIL.

"It is the Resistance who destroyed ISIL and ended its crimes."

He further noted the recent US-sponsored conference on the peace and security in the Middle East region which was held in the Polish capital, saying Warsaw summit was aimed at killing Palestinian cause and isolating Iran.

He also pointed out that Iran has always been ready to help Lebanon, adding that the Lebanese government rejects Iran's help because of US and Saudi interference.

Lebanon suffers lack of electricity because of political bickering, according to Nasrallah, who added that some former Lebanese officials do not want Iran’s help in the field of electricity and medicine because of foreign interference.

Elsewhere in his speech, Nasrallah rejected the US administration’s claims on Hezbollah's presence in Venezuela, saying that "we reject what the Americans are saying about the influence of Hezbollah in Venezuela. We're solidifying Venezuela against US covetous of power, and US claims about our influence are ridiculous. There is no group, network, or organization affiliated with us in Latin America, and we do not have any organization abroad."