memory Of Arif Hussein Husseini and The message of Imam Khomeini

Arif Hussein Husseini was a Shia leader in Pakistan, of the Shia Turi Pashtun tribe. 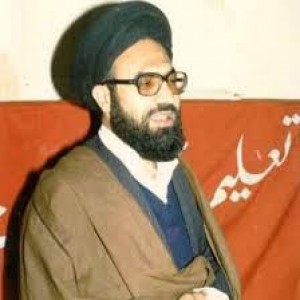 Navideshahed:
Arif Hussain al-Hussaini was born on 25 November 1946 in the Village Piwaar of Kurram Agency, Parachinar into the house of Fazal Hussain Shah. His family belongs to the Husseini branch of Syeds, which trace descent to the fourth Shi'a imam, Zayn al-‘Ābidīn. The specific local branch name was Doerazai. Arif received his primary education at his home town government primary school and later went on to Parachinar to complete his matriculation. Later he got admission into the Madressa Jafria Parachinar from where he went to the Iraqi city of Najaf for further studies, where he also studied under Ayatollah Khomeini in Iraq. In 1973 he returned home and married, and a year later went to the holy city of Qom, Iran to join the Hauza Ilmia. In 1975 and 1977 he went on Haj. Due to the his involvement in Kurrum Agency and also for Madressah-e-Jaffaria in Parachinar, Abid Hussain al Hussaini

called him for help.

He was sent back to Pakistan in 1977 to mobilize the Shia community, and also in that year was the first person to recite a majlis in Pashto, unusual in that the great majority of Pashtuns are Sunni rather than Shia. He also leveraged funding from the Shia Pakistani diaspora in the Persian Gulf to create the Alamdar Foundation in his hometown of Parachinar.
Leadership of Tehrik-e-Jafaria Pakistan

In a meeting of 28 persons called in Bhakkar, Punjab, Arif Hussain was given the leadership of Tehrik-e-Jafaria Pakistan, five months after the death of Mufti Jafar Hussain on February 10, 1984 in Bhakkar. He was recommended by Grand Ayatollah Muhammad Hussain Najafi and other.
Assassination

Hussaini was killed in Peshawar on August 5, 1988. After having prayed at a local mosque, he was confronted by two gunmen and shot; The attackers escaped but were later arrested. Hussaini died of his wounds while being transported by ambulance to a local hospital.

His body was taken from Peshawar to his native village of Peshawar by helicopter. The former President General Muhammad Zia-ul-Haq and special representatives of the Iranian government participated in his funeral rites. The Iranian government supported the construction of a mazar over his grave in Peshawar.

The following is the impressive message of Imam Khomeini in memory of martyr Aref Husseini:


Subject: field of confrontation of pure Islam of Mohammad vs. American Islam
Occasion: martyrdom of Seyed Aref Hussein Husseini
Audience: Muslim nation of Pakistan - Islamic scholars
In the name of God, the Compassionate, the Merciful
I send both my congratulations and condolences to Islamic scholars and Pakistan nation concerning the martyrdom of Seyed Aref Hussein Husseini, the faithful companion of Islam and defender of the poor and oppressed and the true child of Imam Hussein. Although this incident shook the hearts of Muslims and especially Islamic scholars, it was not an unexpected issue to us and to the oppressed nations of world and especially the honorable nation of Pakistan who has tasted the bitterness of colonialism and has gained its freedom with fight and jihad and martyrdom.
Those who are acquainted with pain in Islamic societies, who pledged a blood covenant with the poor and barefooted, beware that they are at the beginning of their fight and have a long way reaching to the breakdown of barriers to colonization and exploitation and obtain of the pure Islam.
I’ve lost one of my dearest sons, may God confer us the ability to bear this catastrophe and take back the deceptions of Islam foes to themselves and make Islamic nation stable and vigorous in its right way of Jihad and martyrdom.
Ruh-allah Musavi Khomeini
Tags:
arif hussein husseini ، navideshahed ، issar and martyrdom
Subscribe to newsletter