Hezbollah Stronger Than Ever

Hezbollah Secretary General Seyed Hasan Nasrallah said that US Secretary of State Mike Pompeo was correct in his concern that Hezbollah is now “stronger than ever.” 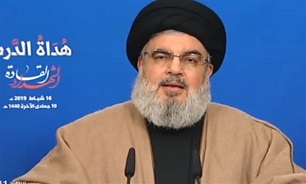 Navideshahed:
During a ceremony to commemorate the martyrdom anniversary of Hezbollah’s leaders on Saturday, Nasrallah said the movement’s power has been increasing linearly - "daily, of course” - even under unfavorable conditions, to reach its current level, The Daily Star reported.

The United States thinks "the source of power is in the weapons, or with money,” and so the US sanctions Hezbollah to try to limit its power, he added.

The secretary-general appeared to be referring to remarks Pompeo gave to media earlier this week, in which he said Hezbollah’s power was increasing, and that the group is now "more powerful than they were four or five years ago.”

The comments followed the conclusion of a conference held Wednesday-Thursday in Warsaw, co-hosted by the US and Poland, which some 60 countries attended.

Nasrallah further said that the Warsaw conference had been a way to impose normalization with Israel, and therefore eliminate the Palestinian cause and Palestinians’ rights.

"They were trying to bring the world together in Warsaw for Netanyahu.”

Nasrallah also denied claims that Hezbollah has cells in Latin America, stressing his support for Venezuela.

Pompeo had told Fox Business channel earlier this month that Hezbollah has "active cells” in Venezuela and Iran has an impact "throughout South America.”

"This is baseless. We have regional influence, yes, but America is trying to represent us as an international power, (which) we are not,” Nasrallah said.

The leader also addressed the issue of Daesh, stressing that the "resistance movements in the region” - Hezbollah, the Iraqi and Syrian armies - have eliminated the terror group and not, as President Donald Trump has claimed, the US.