Secretary General of Lebanon’s Hezbollah Seyyed Hassan Nasrallah said on Wednesday that the Islamic Republic is currently the strongest state in the region, and the so-called axis of resistance led by Iran is the most powerful. 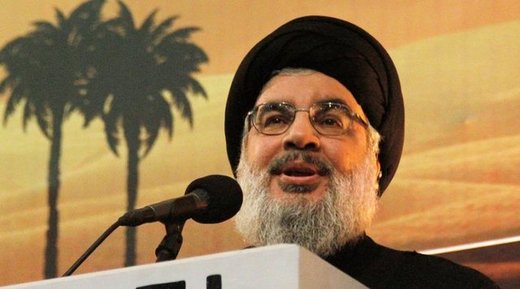 Navideshahed:
Nasrallah was speaking to supporters at a rally marking the 40th anniversary of Iran's Islamic Revolution and the overthrow of the shah.

Speaking via a large screen, Nasrallah said America is set to retreat from the region and has no real option to squeeze Iran except with sanctions, abcnews.com reported.

'We see the struggle in the region may escalate and may take different forms but in all cases, today the Islamic Republic is the strongest state in the region ... and America is headed for more withdrawals and retreats from the region,' he said.

Nasrallah spent over an hour extolling Iran and the Islamic revolution's political and economic accomplishments.

Saying that after the Revolution, Iran achieved independence, Nasrallah added that Iran is now a leading independent country in the region while many countries in the world, including countries in South America have bowed down to the US.

West failed to ignite ethnic conflict in Iran, according to Nasrallah, adding that Iran survived despite all hardships inflicted on it.

He added that after the Islamic Revolution, a popular religious (Islamic) sovereignty was established in Iran.

He went on to note that holding elections and the elections in Iran never stopped even during Iraq’s invasion and high majority of Iranians voted for formation of Islamic Republic after the revolution.

Hezbollah chief added that Iran was subjected to eight years of a global war, recounting that all Arab countries except Syria supported Saddam regime.

”Saddam was provided with everything, even chemical arms in war on Iran,” he noted.

”Iran produces 97% of its medical needs inside the country,” he said adding that the US is afraid of Iran’s medicine exports to Lebanon.
sourece: khabar online
Tags:
nasarallah ، hizbullah ، navideshahed ، issar and martyrdom
Subscribe to newsletter