A disabled Palestinian youth was killed on Friday when the Israeli occupation forces (IOF) heavily opened fire at the peaceful protesters taking part in the Great March of Return on Gaza border. 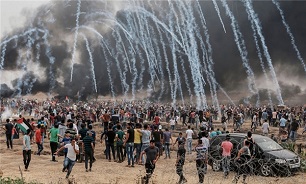 Navideshahed:
Gaza Ministry of Health announced that Karam Fayyad, 26, died moments after he was shot by an IOF sniper East of Khan Younis city in the Southern area of the Gaza Strip, Palinfo reported.

Six Palestinians were injured in the demonstrations by live ammunition, while dozens others choked on teargas.

For more than eight months, Palestinians in the Gaza Strip have demonstrated along the fence demanding their right to return to the homes and land their families were expelled from 70 years ago. The Great March of Return rallies culminated on May 15 to mark what Palestinians refer to as the Nakba, or Catastrophe - a reference to the forced removal of 750,000 Palestinians from their homes and villages to clear the way for Israel's establishment in 1948.

Nearly 250 Palestinian protesters have been killed and more than 25,000 Palestinians injured by Israeli forces since the outbreak of the Great March of Return rallies at Gaza border in late March.

Most of the casualties occurred on May 14 when Israeli forces attacked Palestinians marking the 70th anniversary of Israel’s occupation of historical Palestine and the ensuing ethnic cleansing of half a million Palestinian refugees.